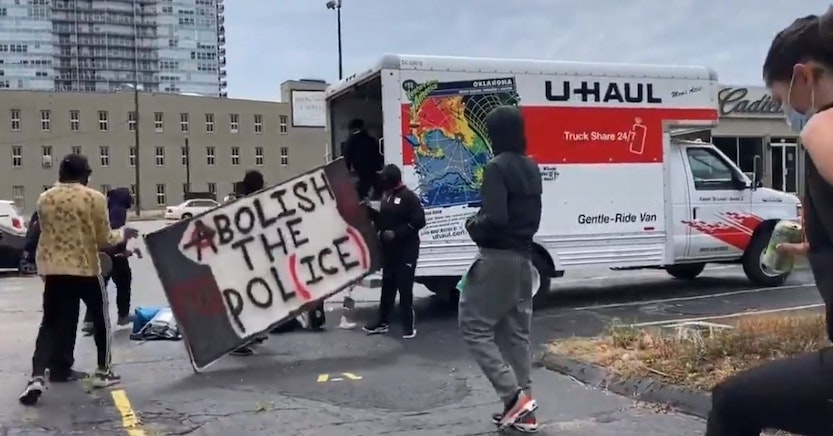 Following the announcement that none of the officers involved in the police killing of Breonna Taylor would be directly charged for her untimely death during a botched no-knock raid, Black Lives Matter protesters immediately mobilized to march through the city of Louisville to show their outrage and grief. Demonstrators were clearly ready for this after Mayor Greg Fischer declared a state of emergency before the announcement was made, which signaled to many that it would not be good news.

For some reason, their readiness seemed to surprise some right-wing pundits, who were aghast at a video showing protesters grabbing signs and other supplied out of a U-Haul in a nearby parking lot. Laura Ingraham then jumped in to ask the important question: “Who paid for the U-Haul?”

U-Haul is a well-known truck rental company in the U.S. and often advertises its affordable base rates for trucks, starting as low as $19.95. For a 15-foot box truck, which appears to be what is used in the video, the base rate is $29.95. Other charges can apply, but it’s generally not so expensive that anyone needs to come up with a conspiracy theory for how a large group of protesters was able to afford it.

That, of course, didn’t stop some right-wing individuals from doing so. Sean Hannity went all the way to evoking the name of George Soros, a Jewish billionaire and common target of far-right antisemitic conspiracy theorists.

In more reasonable circles, it was simply assumed that activists easily predicted that the outcome of the Breonna Taylor case would call for protests and organized materials ahead of time, as good activists often do. The idea that this indicated some kind of radical conspiracy was more than laughed off by Black Lives Matter supporters.

These dunks are worth more than 10 U-haul trucks: