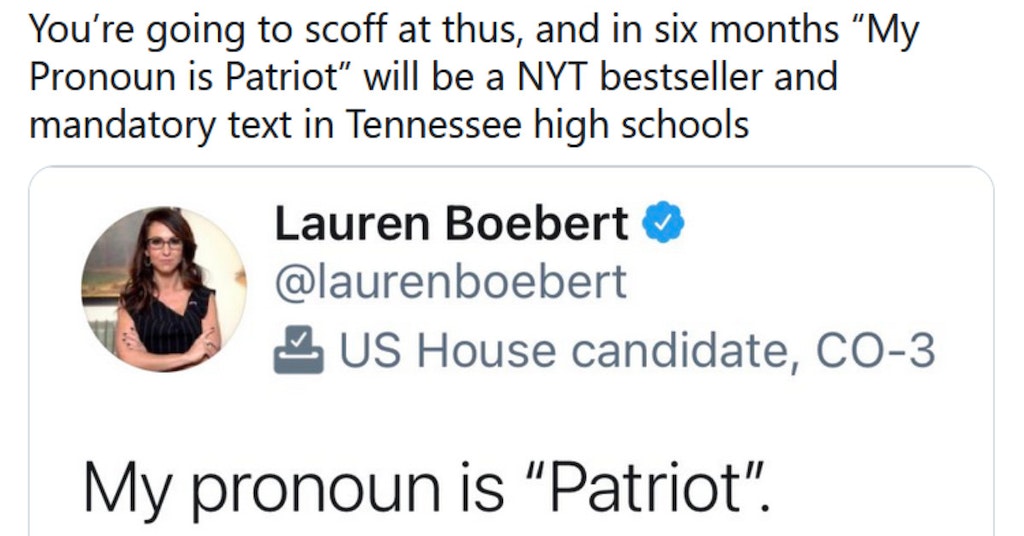 Rep. Lauren Boebert Roasted For Tweeting That Her “Pronoun” Is “Patriot”

In between tweets claiming that Nancy Pelosi’s support of wearing masks means she doesn’t “trust the vaccine” and suggesting that Joe Biden’s high approval rating was the work of the Chinese Communist Party, Rep. Lauren Boebert of precarious gun shelf fame had something to say about pronouns. Presumably as a part of the transphobic Republican hysteria over people asking others to refer to them by specific gendered (or gender-neutral) pronouns, Boebert declared that her pronoun (yes, just the one) is “Patriot.”

While we’re happy to respect anyone’s pronouns regardless of how we feel about them otherwise, we’re going to need clarification on how to articulate the possessive form form of that one in particular. Although “patriot” is typically thought of as a simple noun rather than a pronoun, some alternate pronouns (sometimes referred to as “neopronouns”) take certain nouns and use them as part of their identity in this way.

However, in order for people to be appropriately respectful, trans and non-binary folks typically include additional information. For example, Boebert’s pronouns could be listed as “Patriot/Patriots/Patriotself.”

In all seriousness, this was clearly meant to be another cringe-worthy attack on trans people asking others for baseline levels of respect on the same level as those cisgender dudes who like to say that they identify as an attack helicopter or whatever. Unfortunately for Boebert, this attempt was so badly botched it has people wondering if the congresswoman has any clue what a pronoun actually is.

She wouldn’t be the first, as plenty of conservatives have been seen to deny even having pronouns at all, which would be quite the radical statement if they had any idea what they were talking about. Regardless, Boebert’s many critics have jumped on this opportunity to roast her for this particular tweet.

Enjoy some of the best dunks: