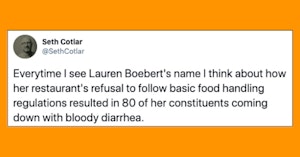 There’s a new crew of cuckoo banana pants reps on Capitol Hill this year, ushered in by a wave of MAGA supporters and QAnon conspiracy theorists who thought Donald Trump would save America from Democrat baby eaters. Yes, that’s where we are at in the political discourse. Trump is gone, but Representatives like Marjorie Taylor Greene and Lauren Boebert are still here.

Boebert is pretty famous in Colorado, partly because she beat a Trump supported guy, unseating a sitting congressional representative in the state for the first time in 48 years.

She’s also famous for her restaurant, Shooters Grill. The restaurant was shut down during the pandemic, after flouting coronavirus restrictions (of course). Salon reports it is known for the way servers carry loaded guns—which they were not required to take training courses for.

Apparently, the woman’s love of deregulation has led to multiple instances where people got food poisoning causing bloody diarrhea. The worst outbreak happened at a rodeo where Boebert’s restaurant served pork sliders.

The pork was prepared at another establishment owned by Boebert, and health officials found they kept no temperature logs, meat was exposed to insects, and there was no handwashing station. Yum! Tastes like old fashioned values. Like, pilgrim times.

A spokesperson for Boebert told Salon that the sick individuals did not consume the same food at the rodeo, but health officials say, “100% of those interviewed with diarrhea ate pork sliders.”

Who are you going to believe here?!