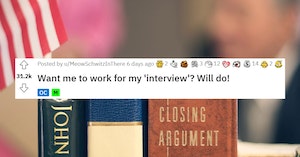 A lawyer with a focus on legal discovery posted about his plot to turn a law firm’s hiring scam against them on the Reddit forum “Malicious Compliance,” and the entry quickly went viral for being extremely satisfying.

The author explains that while searching for jobs, he came across a posting he found suspicious due to his background in discovery, which involves arguing for or against a legal party being required to hand over certain documents to the opposing team.

When someone was looking for a researcher with a background in discovery, the OP’s red flags started flying.

“First, local law firms normally do not need to hire full time R&W people because >95% of that firms cases are very similar (i.e. a personal injury firm normally only handles personal injury cases, so keeping a full time researcher is not worthwhile when all your cases are basically the same),” they wrote. “When these local firms need something researched they either just do it themselves or pay someone else for a few hours of work.”

Also, a friend of his had been hired by the same firm with promises of long-term work and promotions only to be laid off after a few months when the work dried up. The scheme they were running this time, however, was worse than that. As it turns out, the firm never intended to hire a discover research writer at all, but this lawyer wasn’t going to let them get away with it.

The OP sent in their resume and quickly scored an interview. As they suspected, the firm requested an additional writing sample to the one they had provided with their application, this time about a specific legal question, and they wanted it done for free. This is an unpaid version of a “working interview” that people in professions which require things like research, writing, and/or editing are often asked to perform.

Sometimes it’s an honest attempt to find the best candidate. Other times, it’s nothing more than a scam to get free labor without consequences. But when you’re pulling it on a lawyer, you’re playing with fire.

“So I go home and search a couple of local court dockets and wouldn’t you know it this firm is involved in a case with a hearing set on exactly the discovery question they want me to produce a free ‘writing sample’ on,” the Redditor said.

“A few weeks go by and I email asking for an update on the final interview. No response. Then I check that court docket and wouldn’t you know it they straight up copy/pasted parts of my memo in the response.”

This is not the first time that the internet has heard of this type of thing happening. Freelance writers have sent in pitches or even entire drafts to online publications only to hear nothing back, then later find that their ideas or whole articles have been stolen and published under someone else’s name.

It’s an illegal practice, but most people don’t have the legal background necessary to know what to do when their work is stolen like this. Of course, if you’re a lawyer, and the legal firm has been communicating all of this over email, it makes things a lot simpler.

“I send a demand letter for payment + fees. No response. I file a lawsuit for fraud. Oh baby THEN I got a response. A frothy, salty response. Frothaltly. I got called some names. They went on and on about how I was going to lose AND after I lost how they were going to counter sue me.”

“I said ‘sounds good, can’t wait to lose. I guess you did hire a full time R&W attorney. I mean, it would be like baby-town frolics easy to win if you never hired for that position. Actually, it would be even easier if you never even had a final interview for the spot. I’m sure you aren’t that dumb though.'”

If you’re not a lawyer, you may be wondering if the OP was correct on these points. The final line of the post tells you without directly telling you.

“Malicious Compliance” is a forum that celebrates not the breaking of rules, but when people follow the rules to the letter in a way that screws over people like this law firm who are trying to take advantage of people. As such, this post received high acclaim.