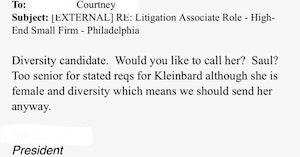 A law office recruitment firm learned a hard lesson in double-checking the essential details of your email before hitting “send” after accidentally sending an email about a potential hire to said potential hire, and she posted it on Twitter. The email, from the president of the company, referred to the woman they were considering as a “diversity candidate,” saying she overqualified but “she is female and diversity” so they should hire her anyway.

The woman in question changed her Twitter name to “Diversity” after post a screenshot of the email, though it suggests her name is actually Courtney.

Courtney explained in follow-up tweets that she was not being considered for a job but had been contacted by the recruiting firm as a possible candidate for a position, though per the email it sounds like she was overqualified and never meant to be a serious candidate. Rather, it sounds like she was meant to be presented to make it look like the firm was making a serious attempt at presenting a diverse slate of candidates to the company they were recruiting for.

“Too senior for stated reqs for Kleinbard although she is female and diversity which means we should send her anyway,” the email reads.

Courtney turned the recruiting firm down officially after they noticed her tweets and asked her to delete them. She has also noted that she can’t sue them for calling her “diversity” no matter how many commenters keep suggesting to her, a lawyer, that she try.

Courtney has now turned the viral tweet into a massive joke, not only changing her Twitter name to Diversity but changing her banner image to Walter White from Breaking Bad saying “I am the danger,” but with “danger” crossed out and replaced with “diversity.” Her Twitter bio also reads “female and diversity.”

She has also tried to helpfully explain to often white and/or male commenters that being seen as a “diversity candidate” does not give her a leg up and is certainly not a thing to be jealous of. Rather, she points to the fact that many women of color are approached in order to gain a certain percentage of “diversity candidates” interviewed for a special certification that makes them look good.

“I really want people to get this part,” she wrote. “Firms have incentive to interview an actual percentage of diversities. They can get a special certification if they do. Marketing. I don’t assume others’ intent. I just want you to have that context.”

In the end, all this does is waste the time of these “diversities” who get offered up for jobs they are not actually matched for and are either rejected or have to turn down a job that doesn’t pay well enough for their experience level.

On the lighter side, Courtney has also shared a number of jokes made by commenters that should give other “female” and “diversity” folks a chuckle.