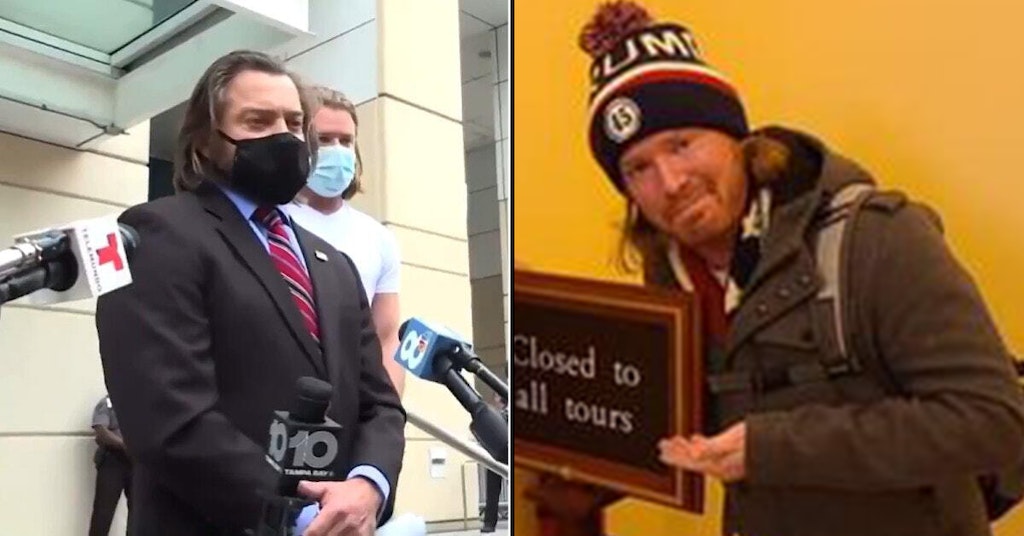 Lawyer Defending Man Who Stole House Podium Gets Candid: “I’m Not A Magician”


Defense attorney Dan Eckhart is facing a tough job in the form of Adam Johnson, his latest client and man who smiled for the camera as he carried Nancy Pelosi’s podium out of the House chambers of the Capitol last Wednesday. Johnson faces charges of government property theft, violent entry, and disorderly conduct for his participation in the assault on the Capitol and was released on $25,000 bail.

While fielding reporter questions, Eckhart seemed to admit that he's facing an uphill battle in this case, to say the least.

"You have a photograph of our client in a building, unauthorized to be there, with what appears to be a podium or a lectern, I’m not exactly sure which one it is called," he said. "But that’s what we have."

One of the reporters replied by pointing out how "that’s a problem for you as a defense attorney" to have a widely-circulated photo of his client in the act of breaking the law. Eckhart didn't bother to sugar-coat the enormity of the task in front of him in his response.

"Yes, I don’t know how else to explain that. But yeah, that would be a problem. I’m not a magician. So yeah, we’ve got a photograph of our client in what appears to be inside a federal building or the Capitol with Federal property."

With that kind of evidence working against him, many are speculating that Eckhart will be looking for push for leniency rather than wasting a lot of time trying to argue that Johnson is not guilty.

Johnson has not yet entered a plea and could face additional charges as the FBI and Department of Justice have announced that they are looking into "significant felony cases tied to sedition and conspiracy." The podium thief was forced to turn over his passport and must observe travel restrictions ahead of his trial, along with many others charged in relation to the attempted coup.

Regardless, many online are clearly vibing with the energy Eckhart is putting out there during this press conference. The video has already been viewed over 2.6 million times and the comments aren't making Johnson's chances for leniency look any better.