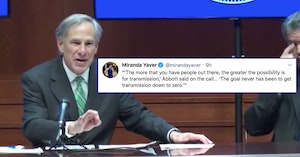 In Leaked Audio, Texas Governor Admits Reopening The State Will Cause Increase In COVID-19 Cases

After a few weeks with stay-at-home orders, some state are beginning to open back up.

But not everyone thinks it’s a good idea. While some locations have managed to slow the rate of COVID-19 infections down, it’s far from under control across the country, and some of the states opening back up are actually doing so in the midst of a spike in infections.

Still, some elected officials with a hand in making these decisions are continuing to do what too many of them have done from the start—downplay the danger of COVID-19.

At least, they’re downplaying those concerns in public.

On a call with Texas Legislators, Abbott was asked how he could be certain that reopening businesses wouldn’t actually increase the spread of COVID-19.

“Every scientific and medical report shows that whenever you have a reopening… it actually will lead to an increase in spread,” he admitted. “It’s almost ipso facto. The more you get people out there, the greater possibility there is for transmission.”

Abbott lifted statewide stay-at-home orders for Texas on May 1.

While stay-at-home orders remain in place in certain cities and counties across the state, many were only under the statewide order, which Abbott declined to renew this month.

This, despite Texas reporting 50 deaths on April 30, the most it had reported in a single day at the time. On May 2, they reported 1293 new cases of COVID-19, the second-highest number of confirmed cases for the state in one day since the outbreak began.

The decision is being criticized even more deeply after Abbott’s remarks leaked.

Texas reopening so soon was already being met with skepticism and concern by many people, including scientists, medical experts, and residents of the Lone Star state.

Abbott had previously only made wishy-washy public comments that Texas “could” see a spike in infections, something he generally associated with an increased capability for testing.

“When you begin to reopen, there can be spikes or increases in those who test positive for COVID-19,” he said at one point, adding that “this is nothing to be worried about, in part, because we will be doing far more testing in the future than we have in the past and that alone will identify more people testing positive.”

But in the wake of his acknowledgement that opening things up would unquestionably lead to more infects, folks are angry at what some see as blatant disregard for human life.

Abbott hasn’t commented on the leaked audio yet. But once you’ve admitted you’re making a decision you know will cause more people depending on your leadership to contract a potentially fatal disease, really, what more is there to say?