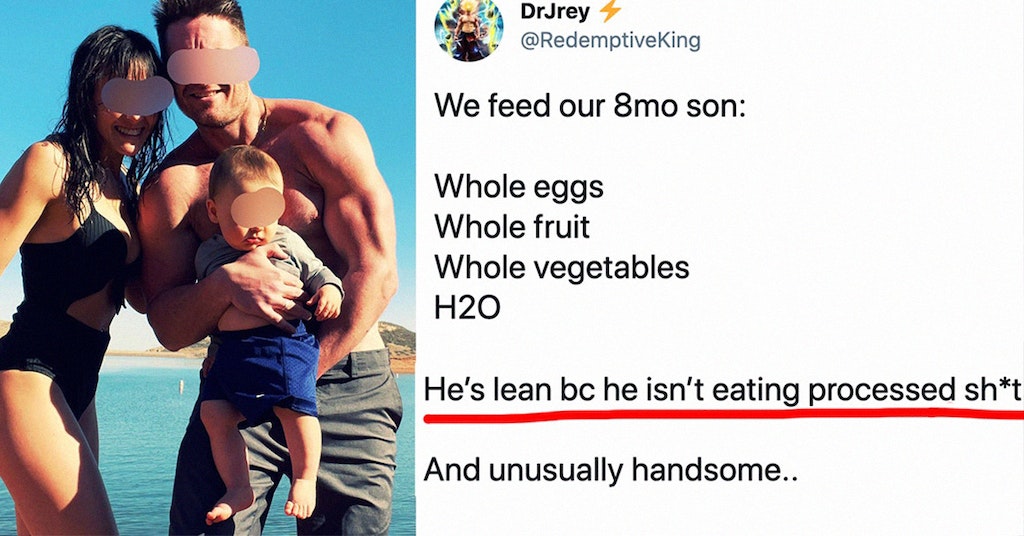 
Everyone knows that parents are absolutely insane about their babies. Sure, they may become less invested as the children grow into actual developed human beings with their own interests and personalities, but when it comes to babies, look out world, parents are going to talk about them non-stop.

A Twitter personality who describes himself as the “CEO of Getting Jacked” has fallen face-first into that last category after a tweet bragging about what his 8-month-old son eats.

“Whole eggs, whole fruit, whole vegetables, H2O,” he listed, clarifying that they do grind everything up for the time being. “99% percentile height/head size, 70% percentile weight. He’s lean bc he isn’t eating processed sh*t. And unusually handsome…”

Parents who refer to their miniature humans as “handsome” are already strange enough, but it’s somewhat common.

Calling a baby “lean,” however, is a new one.

Jacked Daddy over here soon found himself the subject of Twitter mockery for this questionable take.

At the end of the day, everyone is going to parent the way they see fit, but that certainly doesn’t exempt them from getting seriously judged when they share their weird parenting comments to social media.

And some things just really deserve that judgment.