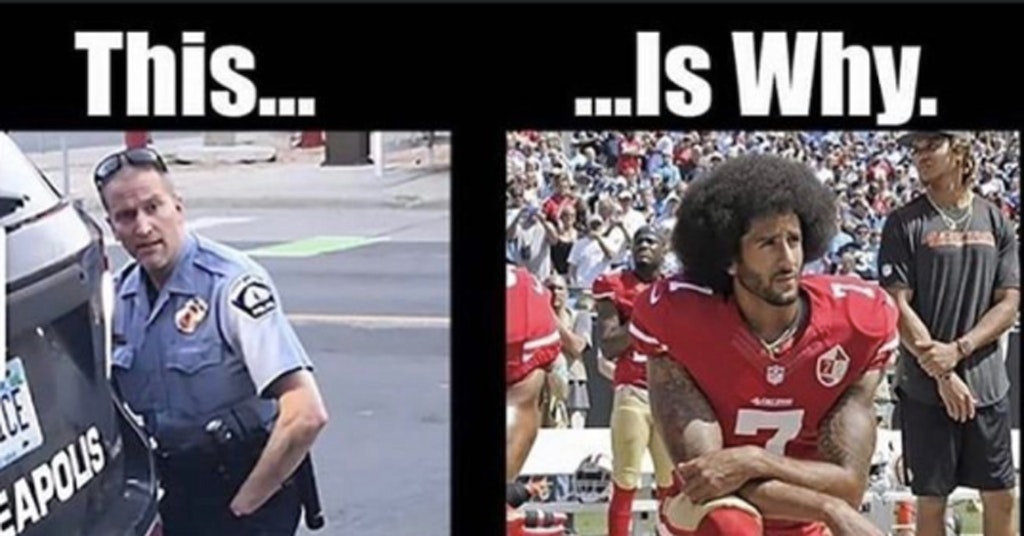 The death of George Floyd has caused widespread outrage across the country, as people protest the death of yet another black man at the hands of police.

In a disturbing video, police office Derek Chauvin can be seen pinning Floyd to the ground with his knee for seven minutes while Floyd insisted he couldn’t breathe and begged Chauvin to stop. When the officer eventually removed the pressure, Floyd was unresponsive. He was later pronounced dead at the hospital.

It’s nearly impossible to watch the footage of Chauvin kneeling on Floyd’s neck without remembering the backlash Colin Kaepernick faced for kneeling during the national anthem at his football games in pointed protest of police brutality against black people.

LeBron James shared an image to his Instagram after Floyd’s death drawing attention to the eerie parallels.

When Kaepernick began his peaceful protest back in 2016, he immediately faced backlash from people insisting “Blue Lives Matter” and that the 49ers quarterback was disrespecting the flag and the country by refusing to stand.

Kaepernick was ultimately released from his contract with the 49ers and settled with the NFL over a lawsuit in which he accused them of blackballing him due to his political statements.

But Floyd’s death exemplifies why visible protests like Kaepernick’s are still so necessary, and James isn’t the only one tying the two moments together.

Protests have occurred in Minneapolis, where Floyd died, over the last two nights. All four of the police officers involved in his death have been fired, but it remains to be seen if any charges will be pressed against them.