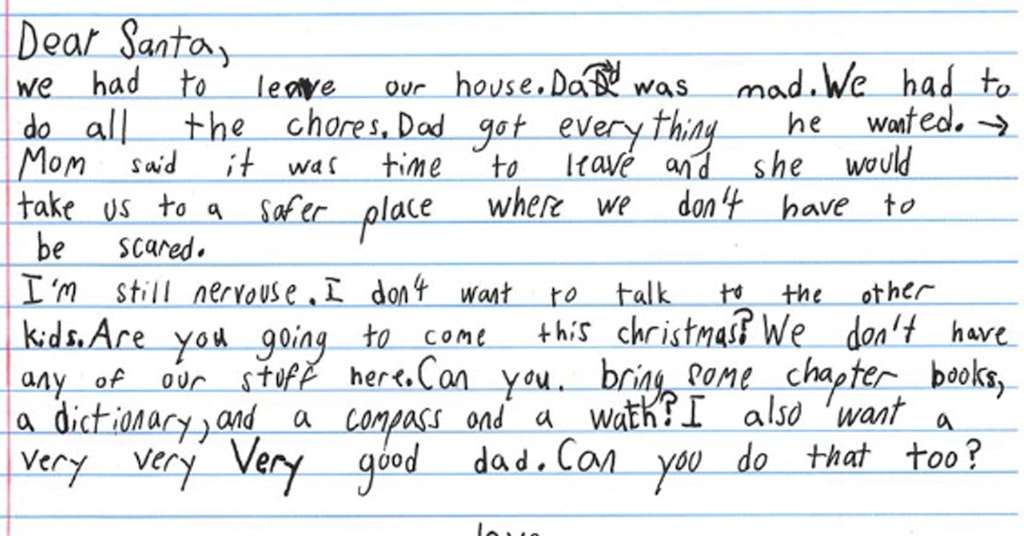 The weeks leading up to Christmas are a time for young children to write their letters to Santa, keeping their fingers crossed for the toys and clothes and video games their parents will craftily sneak underneath the tree in the middle of the night. It’s a sweet tradition, especially when the letters are intercepted on their way to the North Pole and shared with the world through social media.

But one particular letter written to Santa by a young boy in Texas has caught the internet’s attention this holiday season.

7-year-old Blake is currently living with his mom at SafeHaven, a domestic violence shelter in Tarrant County. According to a Facebook post from the shelter, his mom found a letter to Santa in his backpack a couple of weeks earlier.

“Dear Santa,” he wrote. “We had to leave our house. Dad was mad. We had to do all the chores. Dad got everything he wanted. Mom said it was time to leave and she would take us to a safer place where we don’t have to be scared.”

Blake went on to share with Santa that he’s still nervous, and that he doesn’t want to talk to the other kids. And naturally, he seems worried that Santa won’t be able to find them this year if they aren’t at home.

“We don’t have any of our stuff here. Can you bring some chapter books, a dictionary, and a compass and a watch?” he asked. “I also want a very very very good dad. Can you do that too?”

The pleading letter struck a chord with people all across social media.

“Bawling. If only we could make dads do the right thing,” one user wrote on Facebook. “Sweet boy you deserve everything.”

This breaks my heart as a man and a father. We need to be better men.

Please, give this season and through the year to these shelters. They help women to receiver education, legal help and provide a safe haven from violent abuse. Don't forget the children they are traumatised as well. By supporting these shelters women won't have to return home.

I know how this kid feels. I wish I could help him and his mom. But I really do hope he gets his Christmas wish. No kid should be scared of their parents

Several people in the Facebook comments also shared that they were mothers who had taken their children either to SafeHaven or a similar shelter during previous holidays, and credited these places with giving their kids a safe and special Christmas.

And the same will happen for Blake and his mom. SafeHaven reported that they’ve received an influx of donations after the letter went viral, allowing them to ensure Blake — and hopefully all the other kids staying with them — gets everything he asked for this Christmas. Or, at least, everything within their power to give.