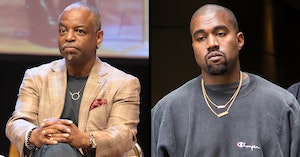 Kanye West hasn’t been dominating headlines quite as much lately as when he was engaged in a perpetually escalating one-sided feud with Pete Davidson, but his recent claim that he’s never read a book definitely turned some heads — including LeVar Burton’s.

In an episode of the “Alo Mind Full” podcast that aired last week, West made the baffling choice to confess to the hosts, “I actually haven’t read any book. Reading is like eating Brussel sprouts for me. And talking is like getting the Giorgio Baldi corn ravioli.”

It’s a wild admission for any grown, educated adult in the modern day United States to make, let alone one who just started his own private Christian school and thought he would make a good president of the whole country.

Burton, who hosted Reading Rainbow for over two decades and has been a major champion of children reading throughout his career and life, brought up both the school and West’s mother, who was an English professor, in his response imploring the rapper to send a different message to children.

While West’s claim is likely not entirely true — schools do technically require reading books as part of their curriculum, after all — even using his platform to speak so negatively about reading is a terrible move.

And Burton was far from the only person to push back at it, but people were happy to see him do so all the same.

Reading isn’t the only way to become a thoughtful, well-educated person, but…it’s generally a big part of it, whether we’re talking about non-fictional learning or exploring experiences difference from your own via fictional narratives.

That West prefers making himself heard to hearing from others via the written word is painfully in line with everything he’s ever put out into the world about who he is; it’s only too bad that it continues to get him places when there are LeVar Burtons out there who would make much better use of a platform as large as Ye’s, promoting things that increase knowledge and empathy instead of discouraging them.