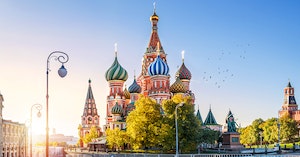 There’s no question that life in Ukraine has been completely upended, sending families scattering and fleeing as Russian forces invade the country. It’s devastating and there’s no way to estimate yet how long it could take for life to settle back into some semblance of normalcy even if the war ended tomorrow.

But there are a few more questions when it comes to discerning how life in Russia has changed with the war so far. We know state-controlled media has pumped their message across the country, and that sanctions from Western countries have started to make things a little more difficult for civilians. We also know that the people of Russia are torn on their government’s actions, and trying to figure out what their own futures look like.

Curious to hear from those inside Russia, one person threw the question out to r/AskReddit: “what is life like over there right now?”

Here are some of the responses:

I have a friend from Kazakhstan studying in Moscow, I asked her if she was going back home and she said, “No, nothing is happening here so I’ll continue school.”

Like I am on the Titanic and we are slowly colliding with an iceberg. When you are trying to say something about it to the captain, you meet some sailors with batons.

My best friend is Russian, Her aunts husband was drafted for war leaving her and their 7 children (included newborn triplets) behind. They are devastated.

Do I want to die from shame? Yes.

Do I expect to have a bright future in this country? No.

Do I know what’s going to happen tomorrow? No.

I’m not the only one who lost their job in my entourage, buying dollars or euros to maintain the worth of your cash savings against the plummeting stocks of rouble is prohibited, had to sell the pc now that I can’t find a job. But eh, the university is still working.

On economical level – well, not good, not terrible as of now. Prices are rising, basic goods like milk are now 10%-20% more expensive. Electronics prices jumped significantly. Many shops closed, many people lost their jobs. Right now it doesn’t feel like apocalypse, but it’s surely getting worse.

Personally, I find it difficult to cope with the fact that so many people are brainwashed into thinking that Putin is saving Ukraine, and I live in Saint Petersburg, which is quite a progressive city. I feel like I don’t belong here, even some of my close friends, who are well educated and anti-putin, being anti-war, still believe some bits of the propaganda. It hurts.

I am studying in Moscow, life has not changed much yet, apple pay does not work, instagram and twitter work only with vpn, prices in stores have risen, some products are not on the shelves at all, I am mentally preparing for the fact that life will become even poorer and harder in the coming years.

Politically the society is very divided now. In the industry where I work people refuse to discuss the war because people who’ve been successfully working together for years started fighting with each other over their opinions about this war. Suddenly many of us realized that people we used to like are very unlikable now. Overall the future looks grim and scary.

Constantly questioning myself what will happen tomorrow. Will the borders close? Will banks nationalize my money? Will internet be closed from the outside or the inside? What big brand will quit next? What opposition member will be put in jail next? It sounds like a bad joke but in the past few days, Facebook and YouTube were claimed to be extremist organizations, for example.

I escaped the country and only get information from my relatives now. Two relatives lost jobs, some vital medicines (insulin, thyroid medicines) are out of stock, female personal hygiene products raised in price by 4-5 times and often are out of stock (“just walk more on fresh air and then you won’t need tampons and pads” as said some idiotic Belorussian deputy). And overall it’s slowly getting worse. But what INFURIATES me the most is that Putin supporters now feel free to openly bully and report to police on anti-war people.