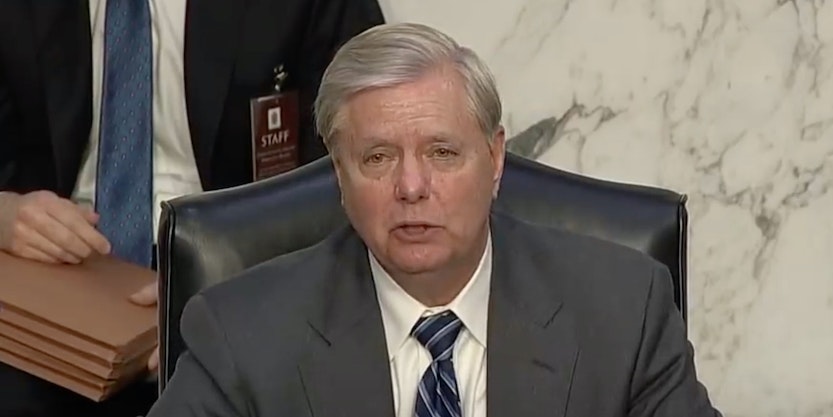 It is almost as if Lindsay Graham is tapping out without having the courage to do so in a straightforward manner. Two days after fellow Senator Mitch McConnell chuckled through coronavirus criticisms, the South Carolina senator referred to the violently oppressive Jim Crow era as “the good old days.”

During the Senate’s hearing to confirm Amy Coney Barrett to a lifetime post on the Supreme Court, Graham attempted to help cover Barrett’s questionable record on cases centered on race. He was trying to get her on record stating plans for re-sanctioning legal segregation weren’t in her post-appointment designs.

“You’re not aware of any effort to go back to the good old days of segregation by a legislative body, is that correct?” Graham asked, to which Barrett agreed.

Even in some unusual jest, that the question could be remotely reasonable to ask a Supreme Court candidate is a signal and sign of where we are in 2020.

“Once again, this is staggering intellectual dishonesty from the left,” T.W. Arrighi, Graham campaign spokesman, told The State. “Senator Graham was using sarcasm to make the point that absolutely no one wants to go back to segregation, hence why there are no active lawsuits to do so. More efforts [of] trying to drum up controversy where none exists.”

Some tweeted that Barrett, who is raising Black children, did not flinch at the notion’s ridiculousness, could be seen as more terrifying.

“That’s a period of immense pain, particularly here in South Carolina, particularly for African Americans,” Harrison said. “It’s not something to joke about, and Lindsey Graham is old enough to know that you shouldn’t joke about. It’s disgraceful. And I know I’m like so many South Carolinians; I’m so tired. I am so tired of cringing every time I see one of our leaders on TV from the state because they’re putting their foot in their mouth or they’re saying something that makes us look like we were caught in a time warp.”

Just five days ago, Graham stated, on live television, that “if you’re a young African American…you can go anywhere in this state, you just need to be conservative, not liberal.”

According to FiveThirtyEight, the nationally-popular and well-funded Harrison has gained a slight lead over Graham, as of Thursday’s polling analysis.

The Intercept’s Aida Chavez noted that on Wednesday, Graham had also committed a crime.

Despite Graham’s increasingly violent language and unusual behavior, he and other Senate Judiciary Republicans have set the internal vote for her nomination for Oct. 22.

According to Forbes, Graham later told reporters that he spoke with “deep sarcasm” when he brought up the “good old days of segregation.”