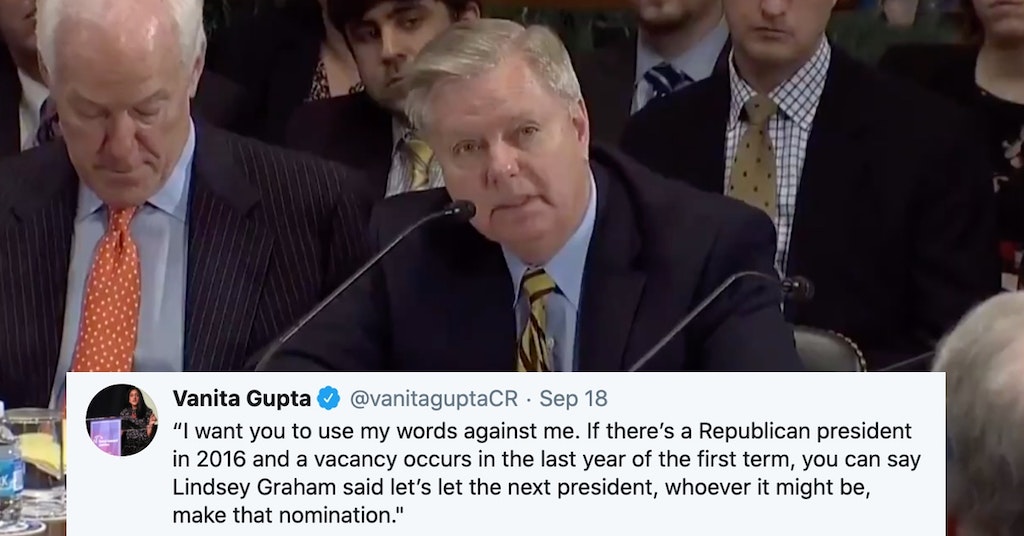 Following the death of Justice Ruth Bader Ginsburg, all eyes were on the Republican senators who, in 2016, insisted that it was unfair to the American people to fill a vacancy on the Supreme Court so close to an election. Would they be singing the same tune now that the vacancy would be filled by a conservative?

Obviously the answer so far has generally been no. Disappointing, but not remotely surprising. Mitch McConnell and the other Trump acolytes have come up with excuse after excuse as to why this time is different, when the reality is there’s no justification for trying to ram through a new appointee when Ginsburg only passed 46 days before the final day of voting.

But no one has had to eat their words quite as harshly as Lindsey Graham. The South Carolina senator didn’t just insist that President Obama’s appointee didn’t deserve a vote back in 2016, when he vowed to respond in the same manner should the same situation arise in 2020.

“I want you to use my words against me,” he said at the time. “If there’s a Republican president in 2016 and a vacancy occurs in the last year for the first term, you say, ‘Lindsey Graham said let’s let the next president, whoever it might be, make that nomination,’ and you can use my words against me and you’d be absolutely right.”

It took less than 24 hours after RBG’s death for Graham to go back on his word. Claiming that “Chuck Schumer and his friends in the liberal media conspired to destroy the life of Brett Kavanaugh and hold that Supreme Court seat open,” the senator said that gave him justification to “support President @realDonaldTrump in any effort to move forward regarding the recent vacancy created by the passing of Justice Ginsburg.”

The idea of getting another conservative judge onto the court to truly tip the balance and finally entertain the possibility of overthrowing Roe v. Wade has Republicans chomping at the bit. Forget precedent, forget standards, forget standing by their word. And members of their base seem to prefer the idea of stacking the court in their favor to holding their representatives accountable to their own words — again, unsurprisingly.

But Democrats had some harsh words for Graham and his ilk.

But no matter how many times people do, in fact, quote Graham’s own words back at him as he once asked, the fact remains that “harsh words” for Republicans is usually as far as Democratic leaders go. Whether any of them actually take whatever stand they can against this hypocrisy — when so many have more or less sat idly by as democracy has been chipped away over the past four years — remains to be seen.

Having the moral high ground is nice, but having a country that actually serves the majority of its people and not the fanatical minority and power-hungry elite is far preferable.