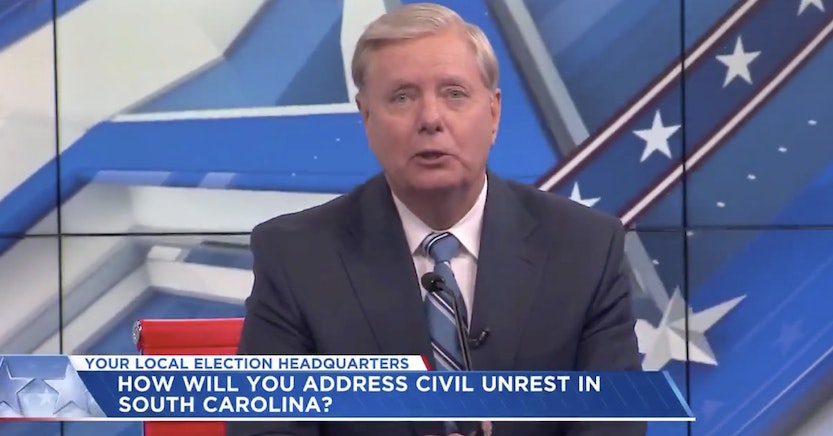 Lindsey Graham is getting shellacked on Twitter over a viral clip of the senator telling an interviewer that immigrants and African-Americans can “go anywhere” in South Carolina as long as they’re “conservative, not liberal.”

Graham was set to debate his Democratic opponent Jaime Harrison last night, but the debate was canceled when Graham, who attended the White House “super-spreader” event for Trump’s Supreme Court nominee Amy Coney Barrett, refused to get tested for COVID-19. Two members of the Senate Judiciary Committee that Graham chairs tested positive after attending the event, throwing a wrench into GOP efforts to confirm Coney Barrett.

Instead of a debate the two candidates agreed to separate interviews.

Asked a question about “social change” and civil unrest during his interview, Graham launched into a defense of law enforcement and said he didn’t believe the state of South Carolina was racist, citing Senator Tim Scott and former Governor Nikki Haley.

“You can be an African-American and go to the senate, you just have to share the values of our state,” Graham said. “Tim Scott is in the Senate, he’s the only African-American Republican [senator] in the country. Nikki Haley is a daughter of Indian immigrants raised in Denmark, South Carolina, she became our governor. In South Carolina, folks, it’s not about the color of your skin or where you came from, it’s about your ideas.”

Graham then attacked his African-American opponent for being liberal and defended his record on criminal justice reform and funding Historically Black Colleges and Universities. He concluded with the claim he’s catching heat for:

“If you’re a young African-American, an immigrant, you can go anywhere in this state you just need to be conservative, not liberal.”

While it does seem like Graham’s “go anywhere” referred metaphorically to achievement rather than literally to travel, many people weren’t happy with the remark.

Graham and Harrison are currently locked in a tight race for his senate seat, with several polls showing them within a single point of one another. With several tight Senate races across the country, Graham’s race could determine whether Republicans will maintain their hold on the Senate. It could also determine whether or not this 2016 tweet from Graham gets roughly infinity likes on November 4th: