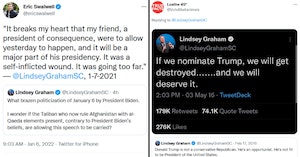 Senator Lindsey Graham made the mistake of attacking President Joe Biden in a tweet today, ripping his speech on the anniversary of the January 6 assault on the U.S. Captiol as a “brazen politicization” of the event that was about the nation’s highest political election. He then took a jab at the fall of Afghanistan to the Taliban shortly as U.S. troops were withdrawing from the country — something Donald Trump had orchestrated and bragged about getting done before Biden was elected.

“I wonder if the Taliban who now rule Afghanistan with al-Qaeda elements present, contrary to President Biden’s beliefs, are allowing this speech to be carried?”

This is some big talk from a man who, just about one year ago, was making statements about how the attempted coup made him feel bad and that the catastrophe would be a stain on Trump’s record.

“It breaks my heart that my friend, a president of consequence, were to allow yesterday to happen, and it will be a major part of his presidency,” he said on January 7, 2021. “It was a self-inflicted wound. It was going too far.”

Representative Eric Swalwell, as well as many other Twitter users, were quick to remind Graham of this as well as other statements he made shortly after the insurrection, as well as certain figures he was caught posing for selfies with and past statements praising Biden and trashing Trump. Graham has changed his tune over the past 12 months on the subject, shifting along with much of the Republican party to acting like the assault was no big deal and generally doing everything they can to bury the memory of that day because it makes them look bad.

But the internet never forgets.