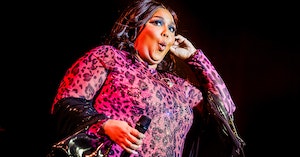 In a recent interview with Tucker Carlson on Fox News, Kanye West called Lizzo’s weight “demonic” and the “genocide of the Black race” all while pretending at being her friend.

The rapper said, “Lizzo works with my trainer, a friend of mine, Harley Pasternak. When Lizzo loses 10 pounds and announces it, the bots – that’s a term, it’s like telemarketer callers – on Instagram, they attack her for losing weight because the media wants to put out a perception that being overweight is the new goal when it’s actually unhealthy.”

“Let’s get aside from the fact whether it’s fashion and Vogue – which it’s not,” West went on. “Or if someone thinks it’s attractive, to each his own. It’s actually clinically unhealthy. And for people to promote that, it’s demonic.”

Lizzo, it seems, was listening, and she was not impressed with her fellow musician’s unasked-for comments on her body. At a concert in Toronto, Canada on Friday, the “About Damn Time” pop star told the crowd of fans that she is minding her “fat Black beautiful business” which appeared to be a direct reference to West’s interview.

Not only did Lizzo allude to the fatphobic comments made by West in the Fox News interview, she also took the time on stage to express an interest in staying in Canada, which the crowd was all too happy to agree with.

“I feel like everybody in America got my motherf-cking name in they motherf-cking mouth for no motherf-cking reason, I’m minding my fat Black beautiful business” the pop star said to her crowd of fans. “Can I stay here? Who can I marry for that dual citizenship?”

The audience cheered loudly, with many folks raising their hands, making the singer joke, “Oh, it looks like everybody’s getting up in here.”