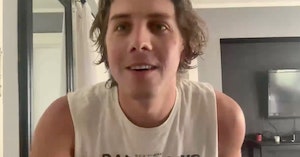 One director is looking like the world’s biggest jerk after he failed to mute his mic while trashing an actor’s apartment during a Zoom audition.

Lukas Gage shared a 30-second video of the awkward encounter to Twitter on Friday.

While the video only shows Gage, a man with a British accent can be heard complaining to someone else about the frame the actor has set up for his audition.

“These poor people live in these tiny apartments, like I’m looking at his background and he’s got his TV—“ he says.

When Gage realizes what’s going on, he interrupts the director to stop him from embarrassing himself further. He also does his best to play the whole thing off, telling the director that he should give him the job so he can get a better apartment.

At the end, the director apologizes and says he’s “mortified,” before they presumably get on with the audition.

It was a painful 30 seconds to watch, and was undoubtedly an even more painfully awkward 30 seconds to live through, and now fellow actors and entertainment industry professionals are showing Gage their support.

And people had some less-than-kind responses for the director.

Of course, there’s also the part where the apartment itself actually looks pretty nice.

Gage has amassed a variety of credits over the past few years, including roles in American Vandal, Euphoria, and the upcoming Angelyne limited series, and it seems apparent that he’s been able to get a decent place for himself thanks to that consistent work. If this director saw the apartments most 25-year-olds living in Los Angeles or New York can afford, he may just faint.

Doing everything over Zoom has made things difficult for all of us, and it’s not like we can all just pop down to the local coffee shop for a casual mid-pandemic meeting with a different backdrop. It would be nice to imagine that people have learned to be more understanding and less judgmental after we’ve all lived like this for over eight months, but Gage’s video proves some people will hold onto their condescension until the whole world crumbles around them. What a choice.