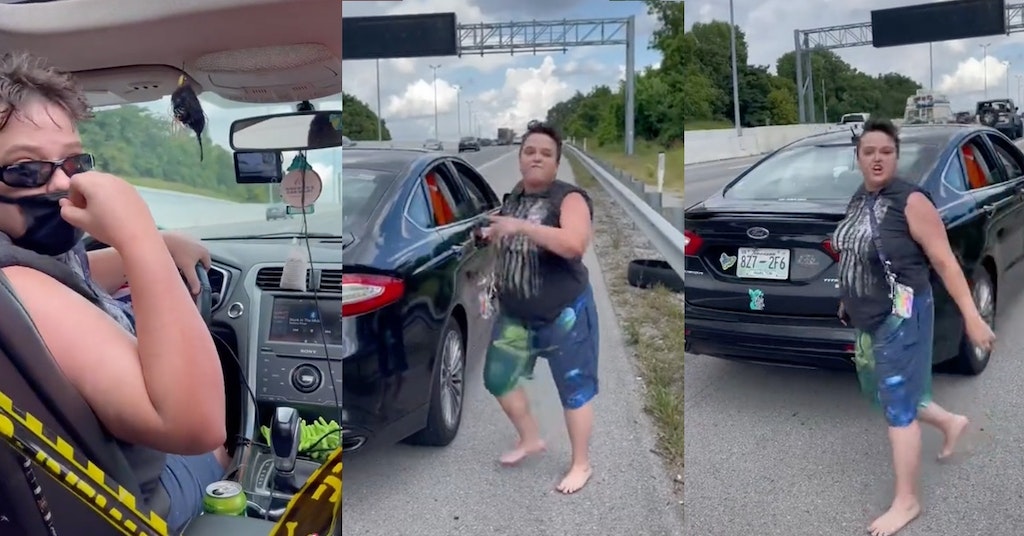 A Lyft driver was caught on camera absolutely losing it over a passenger allegedly asking her to drive the speed limit and/or roll the windows up while going fast on the highway.

As soon as the video starts, the Lyft feels wrong. There’s skull-themed caution tape draped in a sloppy X between the front and back seats, and something red and bulky hovering on the front passenger side — not the usual setup for a rideshare.

It’s clear the customer has already asked this Lyft driver at least once to change what she’s doing, as she’s saying something unintelligible in response over the wind whooshing in from the open windows.

“You know, I’m just trying to ask if you’d go the speed limit is all,” he says.

She turns around in her seat — on the highway, going 80 miles per hour according to the TikTok caption — to yell at him, and notices he’s recording. She tries to hit the camera out of his hand before swerving off to the side of the road and stopping.

While she demands he get out of the car, he continues to record and politely but firmly says he can’t leave until she gets his bags out of the trunk of her car. She screeches animalistic sounds in protest but eventually does go to the trunk, hurls his suitcase out onto the side of the highway, and calls him a b*tch.

“Thank you,” he says, continuing to take the high ground in the situation.

“F—k your mama, too!” she screams in response. She gets back in her car and merges back onto the highway as the now-stranded passenger just stares after her.

The video spread to Reddit from TikTok, and the majority of commenters were shocked by the driver’s behavior.

“Whoa holy sh*t. I guess that’s a good way to not get 5 stars,” wrote u/DazedNConfucious.

“The complementary toss of the passenger’s luggage on to the shoulder of the freeway was a high level [of] thoughtfulness, professionalism, and respectability that we just don’t see from employees sometimes,” u/Wildcats33 joked.

“You can tell by the caution tape that she values safety,” added u/CalmerThanYouAre_716.

Meanwhile, Lyft commented on the original TikTok that they were taking action regarding the incident.

“Safety is fundamental to Lyft,” they wrote. “The incident shown here is concerning. We’re in touch w/ the rider to offer our support and have suspended the driver.”