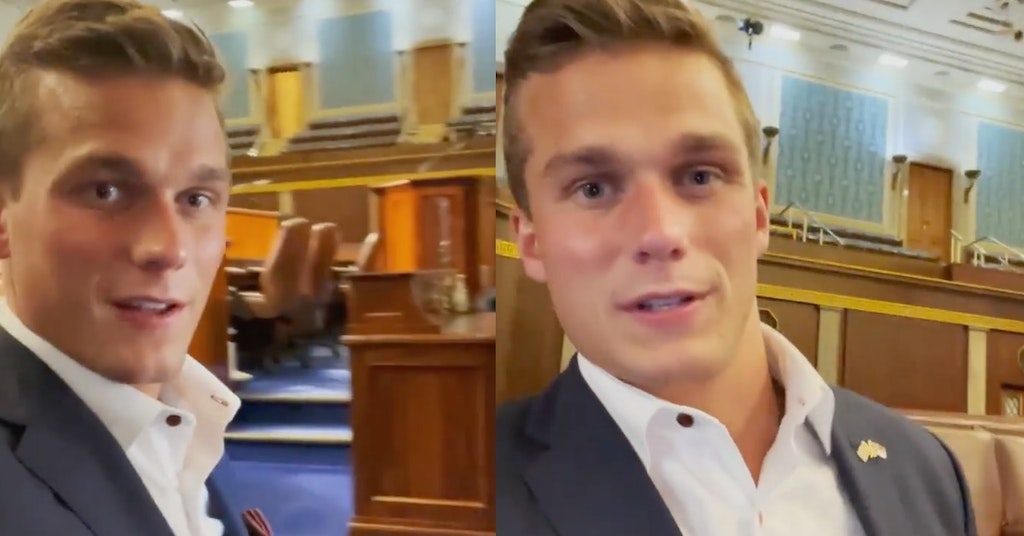 Several freshman members of Congress got elected by running on an extremist pro-Trump platform last year, and they don’t seem keen on dropping it anytime soon — and keep making controversial, and sometimes ridiculous, statements to prove it.

Madison Cawthorn, the 25-year-old from North Carolina who was only recently sworn into the House of Representatives, is clearly among those eager to repetitively make it crystal clear where his loyalties lie.

Not only did he still vote to reject electoral votes that were in favor of Joe Biden after the attack on the Capitol, he called up conservative radio host and Twitter personality Charlie Kirk during the actual siege to put the blame for the insurrection on Antifa live on air.

“I believe that this was agitators strategically placed inside of this group — you can call them Antifa, you can call them people paid by the Democratic machine — but to make the Trump campaign, the Trump movement, look bad,” he said on January 6, with absolutely no credible evidence to back this claim up.

Cawthorn also insisted to Kirk that “really the battle was being fought by people like myself and other great patriots who are standing up against the establishment and standing up against this tyranny that we see in our country,” as opposed to the Capitol riots being “a violent outrage.”

The attack that left five people dead and sensitive government property stolen was unquestionably perpetrated by Trump supporters. That is something we now know to be fact, as dozens have been identified through and arrested, with more to come. The FBI has said they’ve uncovered no proof that there was any Antifa involvement.

The claim that Antifa was behind the attack on the Capitol instead of the very “patriots” they praised and egged on was repeated by a number of Republicans, even as more and more information came out about the riots.

And now Cawthorn himself may be facing implication in inciting the very riot he pathetically tried to blame on Democrats.

In addition to speaking to the crowd in Washington, D.C., hours before the attack, the freshman Congressman gave an incendiary speech back in December, insisting that the new generation of Republicans “are going to be the party that is known to fight.”

As he apparently feels so strongly about election integrity, one also has to wonder how Madison Cawthorn feels about acts of sedition.