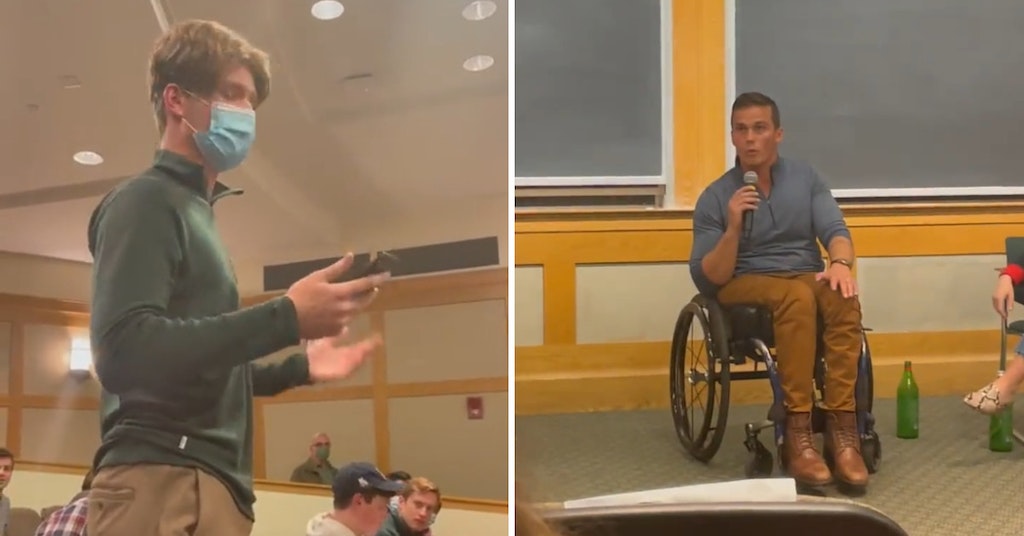 A young man describing himself as a “Gen Z Activist” and digital director for the campaign of Marcus Flowers, who is running to replace Rep. Marjorie Taylor Greene, managed to get into a Q&A event with Rep. Madison Cawthorn and asked him some questions that many of us have been dying to hear answered. Jack Cocchiarella recently posted footage from the event in which he stands up to ream Cawthorn on the January 6 insurrection and his continued pushing of the lie that the 2020 election was stolen from Donald Trump.

“I just had a quick question for you, Congressman Cawthorn,” says Cocchiarella. “A majority of Republicans believe that President Biden was not lawfully elected. Now, you know that he was, and that he won the 2020 election. So when will you stop lying to your constituents, admit that Trump lost, and end this senseless attack on our democracy?”

This was met with claps and laughter from at least some of the audience, and a whole lot of fast-talking from Cawthorn.

Cawthorn tried to speak over the clapping to say he “wholeheartedly” disagreed with Cocchiarella’s statements, to the surprise of no one, and the young activist didn’t give him room to breathe on that one.

“Oh, on the facts, you disagree with me?” Cocchiarella responds. “On the facts that President Biden was lawfully elected?”

After some chatter, Cocchiarella invited Cawthorn to go ahead with his explanation, and he launched into some complaints claiming that only state legislatures are allowed to change election laws in any matter and that six swing states did so without going through the official processes. He’s likely referring to certain policy changes and safeguards put in place during the 2020 election when the nation was gripped in arguably the worst wave of the COVID-19 pandemic, before vaccines were available to anyone.

Multiple states responded to predictions of absolute disaster on Election Day, especially in states where huge lines of voters having to wait until the early hours of the next day just to vote had already been reported in previous years. More ballot drop boxes were issued, which have never been linked to fraud issues since they’re literally just boxes to stick your vote into, and some states set up drive-thru voting systems that proved exceedingly effective.

Meanwhile, of course, far-right Republicans like Cawthorn couldn’t even get independently hired, clearly right-wing companies touting themselves as election experts to find evidence of voter fraud on any scale and not accidentally find more votes for Biden and less for Trump.

“When you have voter drop boxes that are set up in parks, when you can get rid of signature verification, voter identification laws, that is against the law and is an unconstitutional thing,” Cawthorn said. “Are you against the constitution?”

For the record, ballot drop boxes, whether they be in parks or elsewhere, do nothing to prevent signature verification, which has been proven perfectly effective in ensuring that ballots belong to the person to which they are assigned. In states like Washington, voting systems have been converted to a mail-only system in which each registered voter is mailed a ballot that they can fill out, sign, and mail back or put into a ballot drop box at their leisure. Democracy has not collapsed in these states.

Also, no states have gotten rid of their signature verification systems or voter identification laws outside of this dropbox situation, either. Thankfully, Cocchiarella was ready for Cawthorn’s cynical “you don’t care about the constitution” jab.

“When you incited the January 6 insurrection, were you against the constitution?” he asks.

The video ends among efforts to bring the meeting to order.