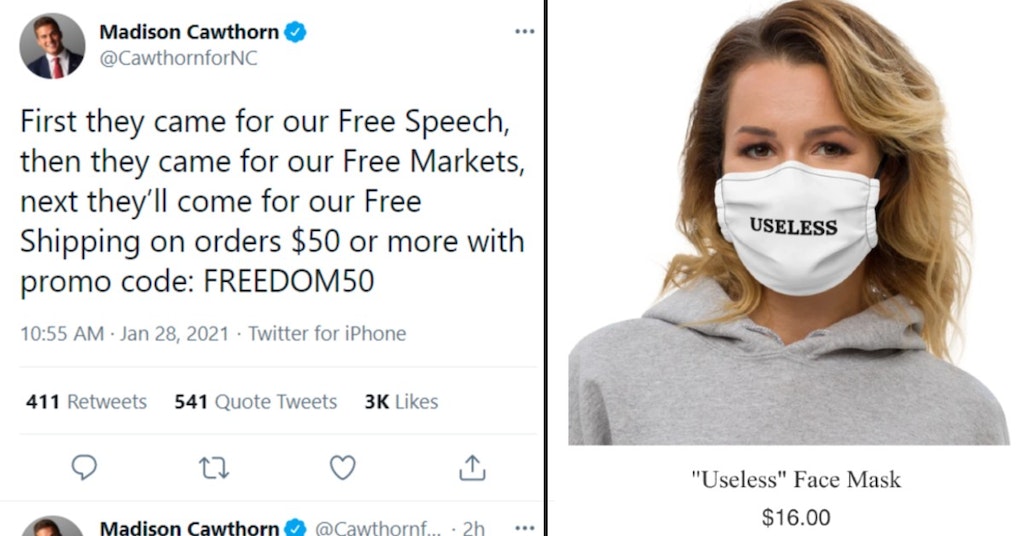 Recently-elected Representative Madison Cawthorn of North Carolina raised eyebrows with a tweet that feels like something that could only come from the most cynical Adult Swim show.

Somehow, without a hint of irony, this Republican congressman Madison Cawwthorn managed to reference a famous poem about the Holocaust in promoting his political merchandise page.

We’re sorry you had to read that.

This, of course, is a reference to the untitled confessional poem by German Lutheran pastor Martin Niemöller about his and other German intellectuals’ cowardice under Nazi rule. We’re just waiting for Cawthorn to claim this was a joke, but generally jokes about the Holocaust that also promote your merch page are considered to be in poor taste, to make an extreme understatement.

It doesn’t help that yesterday was Holocaust Remembrance Day.

But that’s not the only newsworthy thing about this tweet.

His merchandise page originally included a mask that manages to be a bigger self-own than Madison Cawthorn’s own existence. The white face mask contains one word printed in simple black text: “Useless.”

Clearly, this is meant to claim that wearing a mask is “useless” in the prevention of catching or spreading the novel coronavirus, which has now hit the U.S. in a whole new strain that is likely more contagious than the original. However, people are largely finding it impossible to look at the photo of the woman wearing the mask and not immediately feel that it refers to the wearer.

The mask appears to have been removed from the merchandise page, but it still contains gems like the shirts that say “Taxation is Theft” and “The Real Virus is Communism.”

Cawthorn may be about to test the limits on how much one man can be dunked on in a single day.