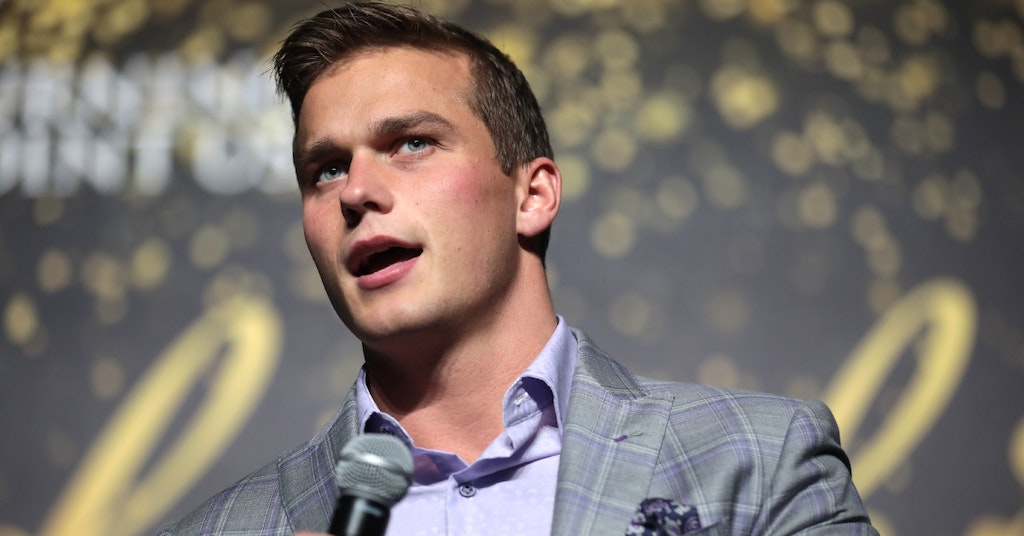 Rep. Cawthorn Asks ‘What’s The Biggest Lie A Politician Has Ever Told’ And Massively Self-Owns

The far-right congressman, Trump supporter, and Big Lie spreader Rep. Madison Cawthorn set himself up for a cascade of jokes at his expense for asking an ill-advised question on Twitter. Even though he answered it himself, claiming that President Biden lied about the cost of his budget reconciliation bill, either Cawthorn or his social media team was clearly not thinking it through when he/they posed a specific question on the congressman’s account.

“What’s the biggest lie a politician has ever told?”

This might not have been such a huge blunder if it weren’t for the fact that Cawthorn has been known to, shall we say, deviate from the representation of objective reality. Even a fellow member of congress couldn’t resist the opportunity to dunk on him for this one.

“Lying about getting into the Naval Academy,” said Rep. Eric Swalwell. “Next.”

Swalwell is referring to the time Cawthorn declared in an impassioned speech at a church, spinning an origin story that has been credited with propelling him into enough relevance to win a seat in federal congress at a young age. The problem with the story is that none of the key details appeared to be true, according to an investigative report by the Washington Post.

According to Michael Kranish, Cawthorn claimed in the speech that he was left to die by his friend after they were in a brutal car wreck that left the congressman paralyzed, that he was declared dead at the scene, and that after later being declared alive, he told his doctor that he would “be at the Naval Academy by Christmas.” Except the friend says he pulled Cawthorn from the crash wreckage, an accident report says he was only declared “incapacitated,” and the Naval Academy rejected him.

On that last one, he either lied to his doctor, or to the church congregation, the world, and God.

The Naval Academy lie in particular stuck with people after the article’s publishing in February, and not long after Cawthorn posted his tweet asking for the biggest political lie, the phrase “Naval Academy” was trending on Twitter.

As for Biden, he has repeatedly claimed that his bill will cost “zero” by saying that his increased taxes on the assets of the most wealthy Americans will pay for it all. Whether or not you consider this to be an accurate statement depends on how you want to look at it, but Republicans also routinely claim their bills won’t cost anything because the costs are covered by something else, usually cutting social programs. Either way, obstruction from moderate Democratic senators guarantees that the total cost of the bill, whether covered by taxes are not, will be considerably less than $3.5 trillion.

Meanwhile, Cawthorn’s critics have some more ideas about some of the biggest political lies ever told.