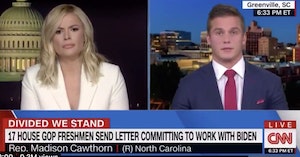 Madison Cawthorn, the freshman GOP Congressman from North Carolina who voted not to accept the results of the election in certain swing states even after the Capitol riots, finally had to admit that there was no widespread fraud.

CNN had Cawthorn on as a guest over the weekend, and he spoke with Pamela Brown about his decision to vote the way he did.

Brown didn’t let him off the hook, repeatedly pointing out that he must have seen really impressive evidence to make “such an audacious decision.”

At first, the Congressman simply kept redirecting the conversation, insisting he didn’t vote the way he did because of (completely baseless) claims that Dominion voting machines were changing votes to Joe Biden or that ballots were being brought in to add more Biden votes.

He instead tried to focus on the state of Wisconsin, and accusations of ballot harvesting.

“But this was all litigated. You know that the Trump campaign litigated this — more than 60 cases — and they lost,” Brown pointed out. “Either the cases were dismissed, the Trump campaign withdrew, or they never brought a case because they didn’t have the evidence to back it up.”

Cawthorn stumbled and repeated himself and added nothing of interest to the conversation, until Brown finally just asked for “specific examples of fraud” that he saw.

“When you think of fraud, you think of a vote, you’re slipping one past the election official, or a vote was stolen, somehow it didn’t count,” she said. “Did you see that, specifically?”

“No Pam, and like I said, that’s not the reason I protested the election,” he admitted.

“I disagree with you on that point,” Cawthorn said. “That was not my intent. My intent was to hold up the Constitution.”

Brown eviscerated him further from there, asking him if he knew more than the Trump-appointed judge that threw the case out, and wondering if he was able to point to where in the Constitution it said ballot dropboxes — the point Cawthorn kept insisting on returning to — were illegal.

Cawthorn was ultimately forced to admit that he “would say that the election was not fraudulent” and that “Joseph R. Biden is our president.”

The fact that it’s actually newsworthy to have members of the political party whose presidential candidate lost finally admit — long after the election was called and after a president has been sworn in — that the president is, in fact, the president, is a sad state of affairs.

But watching Cawthorn, who is already considered a rising GOP star, completely fall apart under pressure after joining in the ridiculous attempt to undermine democracy, was still a wonderful thing.

It really is just as simple as presenting them with the facts and watching them fall apart, isn’t it?