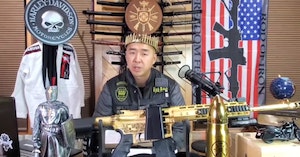 A religious sect that literally worships with AR-15s, as well as little crowns and adorable pink smocks, has purchased a 40-acre compound in central Texas to house its members, which they refer to as “patriots,” but are really just Trump supporters. The nature of the group’s worship as well as details about the church’s leader and the location of the compound have drawn accusations that the Sanctuary Church, also known as Rod of Iron Ministries, is a cult that could easily become dangerous.

Having a compound to isolate members of a religious group is bad enough, but the leader of the church, Pastor Hyungjin “Sean” Moon, is the son of the infamous cult leader Rev. Sun Myung Moon, whose followers were often referred to as “Moonies” by those outside the group. The younger Moon is an avid Trump supporter who attended the assault on the Capitol on January 6, according to Vice.

The Sanctuary Church began having its members carry AR-15s in its services after the new Moon took a single passage from the Bible referring to a “rod of iron” and decided that it was referring to the firearm, which is a notorious top choice for mass shooters in the U.S. In what we’re sure is just a coincidence, his brother, Kook-jin “Justin” Moon, is the CEO of gun manufacturing company Kahr Arms.

More alarming than the possible grift is the fact that Moon and his cohorts are pushing the idea that the U.S. is currently engaged in a mysterious and very scary “deep state war,” which is why his followers definitely need to stay at the new compound. For their safety.

“The internationalist Marxist globalists are trying to start a civil war here so that they can bring in the U.N. troops and Chi-Com Chinese military to come in and destroy and kill all gun owners, Christians, and any opposition, i.e. Trump supporters,” Moon said in a recent sermon. “We are in the death of America right now, and that’s why, of course, God is allowing for our expansion.”

The compound just happens to be 40 miles from Waco, the site of a deadly police siege against another heavily-armed cult in 1993.

Moon’s sermons and Instagram account have also engaged in the conspiracy theory that the 2020 election was “stolen” from Trump and contains anti-mask and COVID-denial rhetoric. He’s taken a step further even than many QAnon believers, claiming that Joe Biden is planning to round up political opponents to place them in re-education camps in what he calls a coming genocide.

Ex-Moonies and experts on cults are deeply concerned about the development of the Rod of Iron church/cult, with some worrying that they’re going down a darker path than the Moonies ever did, as messed up as they were/are.

“It feels like I’m watching a school shooting or something in slow motion,” said one former Moonie whose parents are members of the Sanctuary Church. “These people are just getting crazier and crazier, and scaring everyone. And I don’t know what’s going to happen next.”