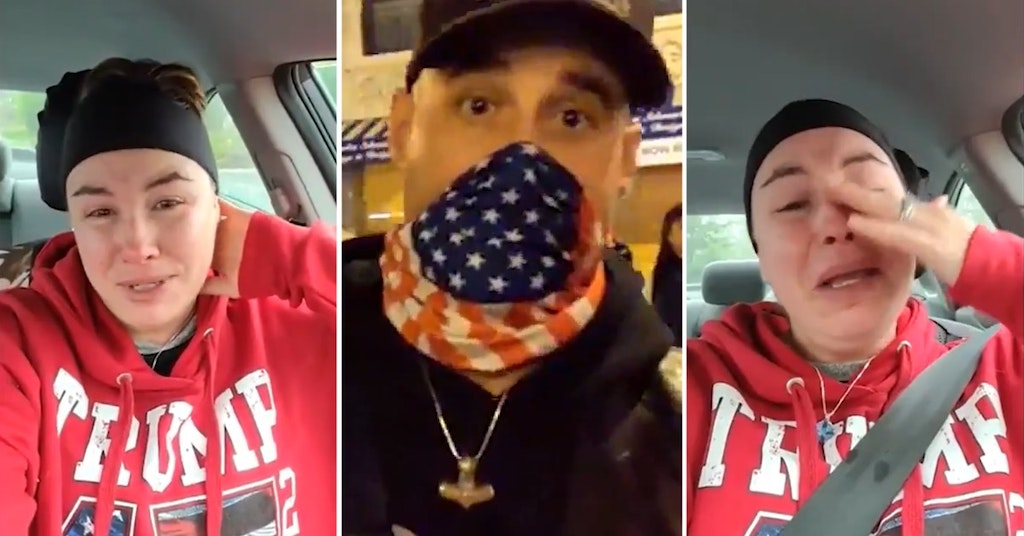 
Councilwoman Michelle Dawson of Yacolt, Washington filmed herself sobbing in her car as she revealed that her husband was fired from his job of six years after video of him harassing and cussing at a reporter went viral. The original video showed Jeremy Dawson walking up very close to a reporter at the “Million MAGA March” (which attracted far fewer than a million Trump fans) and calling her a “b—h” as she asks him to stop stepping on her foot.

A parody account by the name "Jared Pushner" created a video splicing in shots of Jeremy in between his wife's crying and complaining that his actions had consequences.

Jeremy also seems to threaten the reporter in the original video, saying "I can't wait to see you in the f---ing lobby again," referring to the hotel he and the reporter were staying in. In spite of all this, Michelle defended her husband, claiming that he was under stress because something something antifa.

"The video that was made is probably not my husband's best moment, but between antifa and BLM murdering J and all the other bulls--- we have to put up with, I feel what he did, I'm not gonna say is not okay," she said in her driving video. "S--- happens."

The reporter, Laura Jedeed of Portland, Oregon, shared the video of Jeremy harassing and threatening her on Twitter on November 14. Users were easily able to discover Jeremy's identity after his American flag mask kept slipping off of his face as he shoved it right into the camera. Jedeed does not explicitly identify as anti-fascist in her Twitter bio or her online portfolio, but the women Jeremy was with called her "Portland antifa press" in the original video as they tried to call attention to her.

The video by Michelle Dawson was originally 17 minutes long but was deleted from Facebook after it began to spread. Jeremy was formerly a foreman with a local construction company.

Jeremy Dawson is far from the first person to be fired after getting filmed harassing and/or threatening others. The same has happened to people of all political persuasions as companies try to avoid being associated with terrible people.

With this in mind, commenters have little sympathy for the Dawsons.

"Yes, she's literally crying because she just found out that actions have consequences," says Asha. "I mean, she is literally surprised that her husband's being held accountable for threatening a coworker and being a violent bully."

"Her husband is the one who's acting like a terrorist," Lisa comments. "Good for his company to get rid of someone who thinks it's okay to try to intimidate someone to this degree. Michelle 'doesn't even want to get out of her car' If I was dressed like her I wouldn't get out of the car either."

Michelle's term as councilwoman is up in 2021.