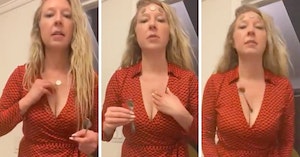 “I Am Literally Super Magnetic”— Says Woman Trying And Failing To Stick Quarters, Spoons To Her Body

Many Gen Xers and Millennials will remember moments from elementary school in which some punk kid spread a thin layer of Elmer’s glue on his hands and let it dry. Then he’d strip it off, telling other kids that he was peeling off his own skin. Or, one of the more cynical kids would persuade one of the more, ah, trusting and naïve ones that “gullible” was written on the ceiling. Remember those days?

Well, there’s now a version of this game for adults on the internet. Except instead of Elmer’s glue, these grownups use a mystical substance called “smart dust.”  And instead of turning into a trick layer of skin, smart dust “makes you magnetic” after you inhale it.

And, according to them, you don’t have a choice in whether or not you inhale it. Nefarious agents from the Deep State make that decision and foist it upon you. (Trust us: it’s written on the ceiling.) If this all sounds too good to be true, look no further:

It’s hard to tell if the woman who made this video is the one peeling Elmer’s glue off her hands, or the one hysterically tattling to the teacher that Jimmy Danielson is tearing his skin off again.

“I just read an article that said it’s possible that there’s, like, smart dust being sprayed and that you could become like magnetic, and I was like, well, that’s crazy,” the woman begins. She is already gesticulating vigorously with a spoon in one hand and a quarter in the other. She says that she knows from the article her forehead and sternum are her most magnetic spots.

“That’s why I have this dress on, it’s low-cut so that [the metal will] stick,” she says, placing a quarter on her sternum.

“As you can see,” she continues, but the quarter promptly falls off her chest. She pauses, catches the quarter, and presses it back onto her chest skin, more firmly this time. “it’s pretty magnetic,” she continues, finishing the sentence. She sticks a second quarter against her bare skin on her sternum. “ I am literally,” she begins, and the quarter falls off. She catches it and places it even more firmly against her skin, this time on yet a different spot. The coin falls off immediately—again. She catches it, then replaces it yet again against her sternum, “super magnetic right there.” She then quickly pulls off both quarters before they can fall again.

“Super magnetic there,” she notes, sticking a quarter to her forehead next. “And pretty magnetic here, and if I can keep going, right there. Even right here,” she says, with four quarters now stuck to her forehead. She bends over slightly, still talking, and all the quarters fall off in rapid succession.

“Finally,” she says, as though her whole goal was to get quarters to drop off her face onto the floor. She moves her hands to her sternum, holding a spoon and a quarter, tapping her chest as she speaks.

“They said it was most magnetic where, your lungs, you breathe it [the smart dust] in,” she says, tapping with increasing urgency. “So possibly it’s, it’s extremely magnetic here.”

She places the spoon against her chest and leans back slightly, presumably so it won’t fall off. She begins slowly turning from side to side.

“Here, I’m sitting right up. It’s literally a spoon,” she says, at which point the spoon falls off her chest and clatters to the floor.

“All right, hold on,” she says, bending over to pick it up. “I’m gonna show you something else.” She sticks the spoon back onto her chest, then another one next to it. “One spoon, two spoons,” she counts, and the video abruptly ends.

More than one person pointed out that the real punch line to this entire absurd spectacle is that in the United States, neither currency nor (most) cutlery is ferrous (meaning it doesn’t contain iron). Non-ferrous metal doesn’t attract magnets.

So this woman made a video of herself claiming to be magnetic, pretending that the non-ferrous objects falling off her body were actually sticking to her . . . because she’s “literally super magnetic.”

It might be another sign of the End Times if we found ourselves endorsing Insane Clown Posse for any reason. Still, we can’t help wondering if they glimpsed America’s future when they posed that eloquent question for the ages: “F—king magnets, how do they work?”