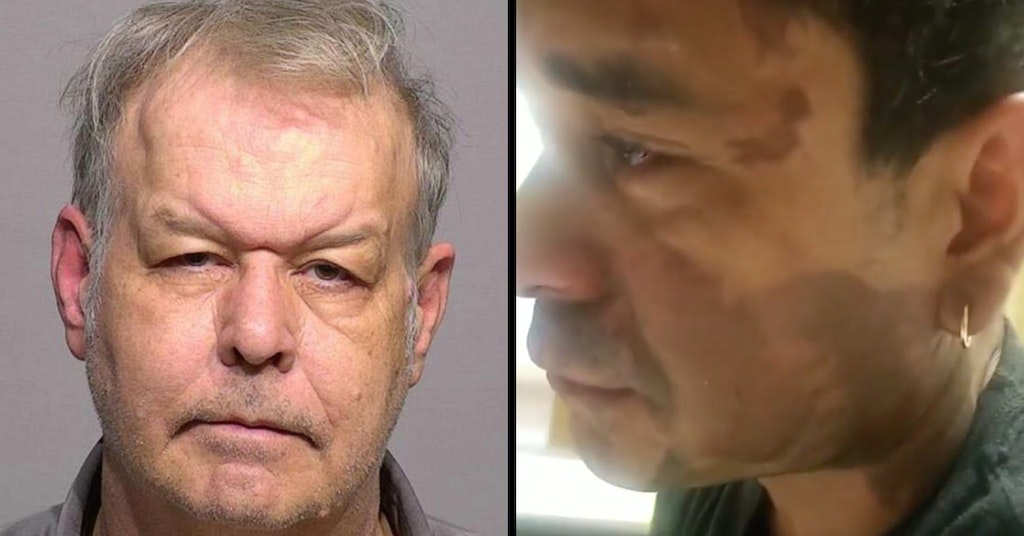 White Man Charged For Throwing Battery Acid On Latino Man’s Face, Telling Him To Go Back To His Country


On Wednesday, a 61-year-old man named Clifton Blackwell was charged with a hate crime after attacking a man named Mahud Villalaz outside a Mexican restaurant in Milwaukee with battery acid, throwing it in Villalaz’s face. Blackwell, who is white, allegedly threw the acid while shouting, “Go back to your country,” according to Buzzfeed News. Villalaz is a U.S. citizen. He is now unable to see from one of his eyes, and his face is painfully burned.

Blackwell was charged with first-degree reckless injury with use of a dangerous weapon. The hate crime charge increases the severity of the possible punishment.

The altercation began as Villalaz walked towards the restaurant. Blackwell began yelling at him, saying his truck was parked too close to a bus stop. Then Blackwell allegedly screamed at Villalaz, “Why did you invade my country? Why don’t you respect my laws?”

Villalaz says he ignored Blackwell, but did go back to move his car. As he returned, Blackwell was still there and asked him again, “Why did you invade my country?”

Villalaz was born in Peru. He came to the U.S. in 2001 and officially became a citizen in 2013. He says he noticed a bottle in Blackwell’s hand but thought it was an alcoholic drink. Blackwell continued to berate him allegedly calling him an “illegal.”

“Sir, you don’t know my status,” Villalaz responded, but eventually called Blackwell a “racist motherf*cker” and added that “everyone comes from somewhere first.” According to the police report, he told Blackwell, “American Indians have been in the country the longest.”

The acid attack has been caught by nearby surveillance and shows the two men arguing, then one of them throwing the contents of a bottle in the other’s face. Villalaz says that when the acid hit him, he ran into the restaurant for help, unable to defend himself as the pain hit him.

#BREAKING – Video shows the moment a man was hit with battery acid. Police arrested the culprit & call it a hate crime because the victim, who is Latino, says before he was hit by the white male suspect he called him “illegal” STORY: https://t.co/WAiX44Sx9d pic.twitter.com/pb2agxS6Go

“It started burning, really bad,” he told reporters. “I started screaming for help.”

He attempted to wash off the acid in the restaurant bathroom. He said he was fearful Blackwell might have a gun as well and try to kill him.

Villalaz’s story has horrified people everywhere. His sister, Priscilla, created a GoFundMe for his medical care, and to help him survive during his recovery, which has been very painful.

“My brother is a welder. Because of his injuries, he will not be able work until his burns heal and he is fully recovered,” she wrote. “We know that these types of actions are not OK. We see acts of hate like this happening everywhere.”

The family began their GoFundMe at $15,000, but have raised almost $50,000. Many people donating are commenting about how hate crimes and violent acts are on the rise. A man named Steve Etal wrote, “I’m embarrassed to be a white middle-aged male when these nationalist racists commit these crimes. You are absolutely right – we all came from somewhere to this country. Godspeed in your recovery.”

On Monday, Milwaukee Mayor Tom Barrett told reporters that there is a link between the rise in violence against Latinx populations and Donald Trump’s public racist rants.

“This anger towards people from other countries is being fed by our president and by his followers,” he said. “What we saw over the weekend is a manifestation of that anger.”

A video taken of Villalaz at the hospital shows him video chatting with his 5-year-old son. Talking to reporters, Villalaz says that explaining what happened to him to his kids has been one of the hardest parts of this ordeal.

“I don’t want this guy near my kids, near my family,” he said. “How can you be like that?… My son calls me today, ‘Daddy what happened with you?’ What do I tell him? Some crazy guy did this to me. That’s what happened.”