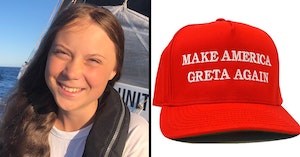 Donald Trump has pretty much ruined red baseball caps forever, ever since he started emblazoning them with his nationalist slogan “Make America Great Again.” It’s such a well-known phrase, he can just randomly tweet “MAGA!” and people know what he’s saying—that he’s a racist with delusional ideas about America used to be and what he can fashion it into from the White House. That’s too long to fit on a hat, though, so Make America Great Again has to convey a lot.

Enter teen activist Greta Thunberg, who has inspired millions of people all over the world with her consistent, persistent attempts to make the adults in the room really confront what they’re doing to the planet. She’s inspired a lot of conservative rage and even gotten the sarcastic attention of the president. And her name is Greta. Do you see where this is going?

People have started to show up to protests with signs reading “Make America Greta Again” and tweeting the phrase everywhere, and it really seems like the perfect troll to pull on Trump:

You can even buy the hat on Etsy if you’re so inclined, though it seems a little too close to the real thing to comfortably wear outside:

Oh, someone did this. I saw it as a mock-up on a red baseball cap few days ago.

This must really piss Trump off—if he notices. He’s been accused of not being able to read, so who knows? I like the idea of a Swedish teen ruining his crazy idea of what makes America great, but I can’t condone anyone else wearing this style of hat. Instead of buying something that will trigger fear wherever you go, donate the money to an organization fighting climate change and write the phrase in the memo. Do it for Greta.