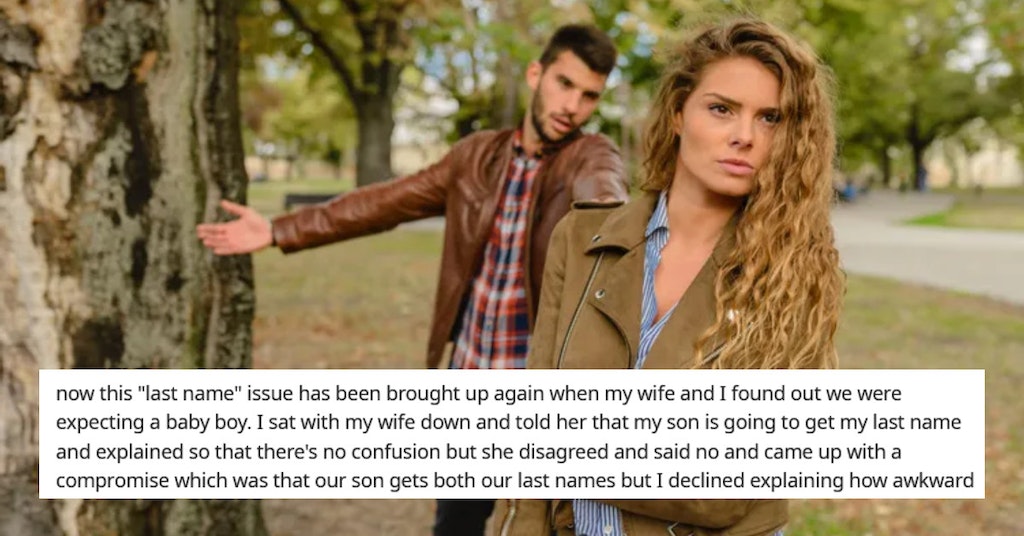 There’s another popular entry on the famed Reddit forum known as “Am I The A–hole” and it’s not a head-scratcher for many people, with Redditors widely voting the OP to be in the wrong for a martial dispute over the naming of the couple’s first born son.

The 32-year-old man started off by explaining that he was totally definitely fine with his wife keeping her last name after they were married in spite of the fact that his Southern U.S. family was upset about it, because sexism.

But when his wife became pregnant with their first child, his charitable spirit (read: basic human decency) ran out.

“[S]he comes from a country where women get to keep their maiden name after marriage which was fine with me though as someone who comes from the south my family pushed for my wife to take my last name but she ended up keeping hers which made my family somewhat unhappy saying it was disrespectful of her to keep her maiden name but thankfully they got over it and things got better and we reconciled later,” he wrote.

To be clear, the U.S. is also a country where women get to keep their maiden name, as are most countries, even if it might be culturally looked down upon for weird patriarchal reasons.

Anyway, along came baby, and dad immediately determined with zero input from the person who would be developing and pushing said baby out of her vagina that the child would have his last name only, end of story, not interested in the obvious compromise.

“I sat with my wife down and told her that my son is going to get my last name and explained so that there’s no confusion but she disagreed and said no and came up with a compromise which was that our son gets both our last names but I declined explaining how awkward and confusing and just complicated that would be.”

It’s really not confusing or complicated at all. In the Year of our Lord 2021, many people have duel last names, simply hyphenated to avoid confusion on whether it’s a last or middle name, such as a fairly popular U.S. congresswoman. But as much as the OP insisted this was the primary reason for insisting that the baby have his last name only, entirely ignoring any possibility of him having the wife’s last name only, he kept coming back to his family and acting like he did his wife some huge favor by “letting” her keep her last name.

“[S]he threw a fit calling me selfish and accused me of treating her as if she as a mother gets less or no say but I reminded her that she got to keep her maiden name and so we’re even,” he wrote.

Both his wife and the vast majority of Reddit commenters did not agree that they were “even” on this. It doesn’t take a degree in Women’s Studies to realize that this man is operating on a gross patriarchal norm that says the man is the head of the household who gets his name on everything by default, with anything else being a special gift to the woman he owns.

In fact, the responses were so intensely negative that the OP wrote an edit again explaining his terrible position as his “a–hole” label grew only stronger and the negative comments kept coming, with many hoping that his wife can find someone better to share her life with.