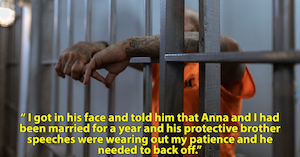 Man Goes Off On BIL Who Won’t Stop Hounding Him About Criminal Past, Asks ‘AITA’

Marrying someone with a criminal past can cause problems in the family. Is this person trustworthy? Are they rehabilitated? Hopefully the person is on a path of integrity — and is receiving support from loved ones. Unfortunately, there are people who don’t believe in time served and will harass family for past criminal behaviors.

One Redditor who served time for burglary and then got married is having a hard time dealing with his brother-in-law, who only seems to want to hound him about his past and warn him to treat his sister right. When the two of them got into a fight on a family vacation, it left the OP wondering whose fault it was.

“I (26M) have been married to my wife Anna (25F) for a year. We recently had a couples weekend vacation away with my brother in law (Mark, 31M) and his wife. I initially didn’t want to invite Mark but Anna insisted. Mark and I have never really gotten along much. I have a criminal history and I don’t think Mark has ever really been able to look past that with me, even after marrying his sister,” the OP writes.

“At our vacation rental on the Saturday, we all got a little drunk. As I went to get another drink, I noticed that Mark was following me. He started the whole protective big brother act again and talking about how he hopes I’m ‘treating Anna right’ and have ‘truly left my past behind me.'”

“It’s probably just the alcohol but I had had enough of this speech which I had heard a hundred times at this point. I got in his face and told him that Anna and I had been married for a year and his protective brother speeches were wearing out my patience and he needed to back off. We ended up in a shouting match and Anna and Mark’s wife had to come in and break it up. The weekend was more or less over after that due to the tension between us.”

“Anna says I should have just ignored Mark when he started going off like that but she isn’t the one who is on the constant receiving end of his comments towards me. I do feel bad that I ruined the weekend but I don’t know if it’s entirely my fault here. AITA?”

The OP added later that he was jail for one year because of burglary, and that it was nonviolent.

“You’ve been married a year. Not 10 years, or even 5 years. But a year. We also don’t know anything about what your criminal history is (or how long ago it was). And honestly – what he said didn’t even sound that bad. You seem to be triggered very easily on this – and honestly you likely just heightened his concern. I mean, again, in the grand scheme of things… this doesn’t seem that harsh to me. Especially 1 year into marriage,” said

“If you constantly hear the same thing over and over again, it’ll get old real quick. Also if he’s doing the brothering correctly it’ll take  one very menacing, very blunt talk to get the point across. He hasn’t screwed up, so the brother needs to back off. I get being over protective but there’s a line and it seems the brother continues to cross it,” noted

“NTA. Who made Mark Anna’s keeper? Why does he think his sister cannot decide for herself if her husband is treating her well?” asked

“NTA. He provoked you as usual and you lost your temper during a couples vacation. I’m sure alcohol played a significant role in all of it, too. Your wife needs to understand and accept that you two just don’t get along. Period. Ask her to stop planning things like that for everyone’s sake. It’s easy for her to say what you should have done but she hasn’t been in your position hearing the same old big brother spiel over and over again ad nauseam,” said

“Uhhh no. They are married. She made a choice to look past his history, which frankly does not matter unless he did something completely heinous. In the US, people get prison sentences for the dumbest shit all the time so you have no right to judge based on that little tidbit. His wife made the decision to marry him regardless of his past. I understand her family’s concern, but they have no right to continuously hound this guy based on past mistakes. His ‘little sister’ is a grown ass woman who made the CHOICE to marry OP. Her brother needs to respect that choice and get the f*ck over it. Stop infantilizing women. Stop treating women as if they need protection from all men. It’s disrespectful to every person involved,” stated