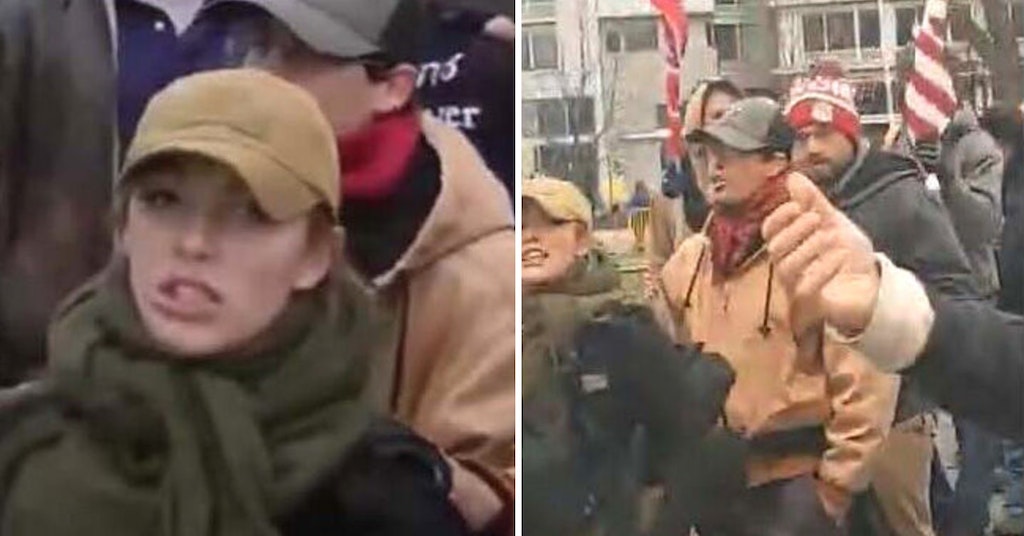 An Arizona dad is yet another individual coping with the reality of the assault on the Capitol on January 6 by blaming antifa after his two kids were arrested and charged for participating in the insurrection. Felicia and Cory Konold were both caught on camera near the front of the violent mob as they fought with Capitol police and broke into the legislative building.

Their dad, 62-year-old Robert Konold, says he was “shocked” to see the footage of them in the mob, but rather than believe that the problem could ever lie with the Republican party, repeated the debunked line that it was somehow antifa’s fault.

“It couldn’t have been Trump guys,” he said. “I’m thinking it could’ve been more Antifa or, you know, Democrats wanting to make Trump look bad or something. No normal Republican would go nuts.”

Of course, what is “normal” and what is “going nuts” is in the eye of the beholder.

The Konold kids were arrested as part of a group of Proud Boys, or at least people associated with the violent far-right group recently declared by Canada to be a terrorist organization. They along with three others appeared to move as a group, according to the criminal complaint, and all wore pieces of fluorescent orange tape.

Due to this, the Konolds have been charged with conspiracy along with civil disorder, obstruction of an official proceeding, trespassing, and disorderly conduct on Capitol grounds.

According to Robert, Felicia was involved in a serious car crash resulting in serious injuries and a DUI charge and he hasn’t spoken with her since. However, he insisted that his son is a “normal fricking kid” and says he assumed Cory was only going to the Capitol to keep tabs on his sister.

“He was more there, I think, at that point, to keep an eye on his sister, that’s the only thing I can come up with,” said Robert. “He was just going to drive with his sister because she was going to go regardless. He figured, ‘hey, road trip, and we can both share driving.'”

Robert said he didn’t think either of his children were associated with the Proud Boys. Unfortunately for him (and everybody), the FBI found a video of Felicia in which she “celebrated that she had just been ‘recruited'” into the designated SPLC hate group.

The Proud Boys are notorious enemies of anti-fascist groups, who consider the Boys to be the exact kind of fascist organizations they exist to fight. The two sides have frequently battled it out on the streets in cities across the Pacific Northwest, sometimes resulting in serious injuries to anti-fascist counter-protesters.