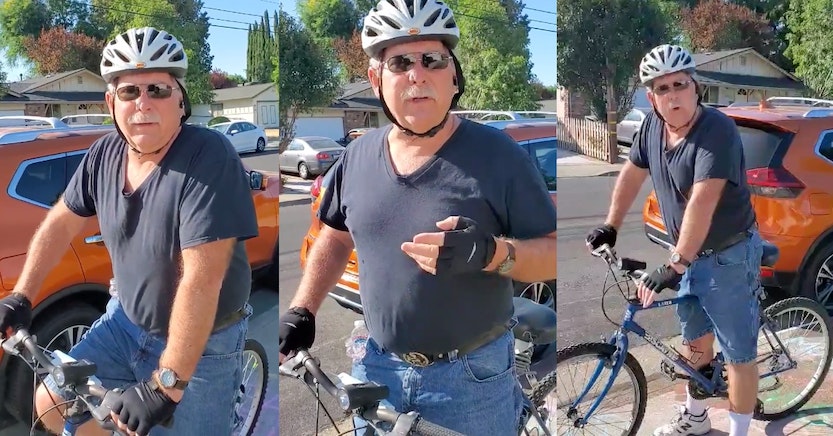 A San Francisco woman filmed a heated confrontation between herself and a neighbor who took issue with her writing “Black Lives Matter” on her sidewalk with chalk.

Manette Sharick says she and her 3-year-old daughter had chalked the sidewalk in front of their house four times before she finally caught a neighbor, Jim, pouring a water bottle over the word “Black” to erase it.

In the painfully long video, which Sharick shared to Facebook last week, she calls him a racist and asks him to mind his own business.

But instead, Jim insists they need to have a “discussion,” accusing Sharick of falling for the indoctrination of the left, telling her she can take write BLM in another neighborhood, and insisting his destruction of the chalk is valid because all people are equal, blah, blah, blah.

“Black lives matter, and I’m Black,” she tells him. “And you white. And you erasing the word black every time I write it on the sidewalk for Black Lives Matter.”

Speaking with ABC7 later, Jim said pretty much exactly what anyone would expect him to say.

“I’m not a racist. The only reason I did that is because I thought someone was tagging his house with racist thoughts,” he said. “I was only pouring across the word Black because I believe that all lives matter.”

But Jim’s insistence on butting into someone else’s business may have backfired.

Sharick’s video went viral, resulting in an outpouring of support from her community and beyond. Neighbors have started chalking their own sidewalks with “Black Lives Matter,” while people who were a little farther away have been sending her chalk so that she and her daughter can keep right on reminding Jim and anyone else who recoils at the word “Black” that they aren’t backing down quietly.

“At this time and day it’s about Black lives that are being mistreated unfairly and that is what the Black lives movement is about,” Sharick said. “We will continue to stand up in a peaceful manner and fight for what’s right and fight for ourselves. We will not be silent.”