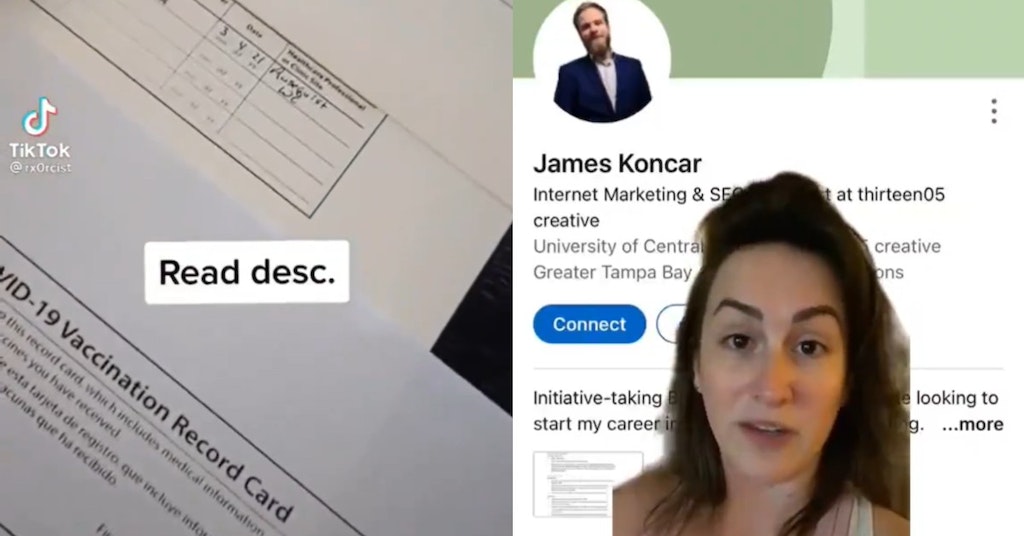 
A TikTok user who posted a video showing counterfeit vaccine cards, meant to be used as proof that one has received the COVID-19 vaccine, that he intended to sell to people has reportedly been fired from his job in the state of — you guessed it — Florida. This firing happened after another TikTok user, Savannah Malm, exposed his scheme in her own video.

You might remember Malm as the woman who also exposed registered nurse Tori Garrity after she posted a video saying she wanted to obtain a fake vaccine card. The nurse was no longer employed at the most recent hospital shown on her Facebook page at the time she posted the video, but this latest fake vaccine card person, identified as James Koncar, was not so lucky.

In Malm’s response video, she shows a clip from Koncar’s video that displays COVID-19 vaccine cards printed out on some paper with the caption “read desc.,” short for “video description.” Malm follows his advice, reading the description aloud for her followers.

Malm went on to both expose Koncar’s LinkedIn page along with his now-former workplace and at the same time drag him for being an absurd enough human being to publicly announce that he was intending to commit a criminal act and filming something that anybody would assume was illegal.

“Now James, do you really think it’s smart to advertise that you not only forge medical documents but also have the intent to distribute them?” she asked. “Did you not learn how to not commit multiple felonies and then put it on the internet as an internet marketing specialist at thirteen05?”

Thirteen05 being the company that Koncar used to work for before he was fired and took down his LinkedIn page.

The video quickly went viral as people reported Koncar’s videotaped crimes to his former workplace, which responded quickly by first suspending and then terminating him.

Malm took down her video exposing Koncar at thirteen05’s request, but unfortunately for them, they can’t stop it from spreading to the rest of the internet. More unfortunate is the fact that Malm is now getting death threats from Koncar’s fellow anti-vaxxers for doing the extremely good and important work of exposing people who are intending to buy and sell counterfeit vaccine cards.

However, she maintains no remorse for her actions.

“Over a year into this pandemic, we do not have the time to coddle these people,” she told Axios.