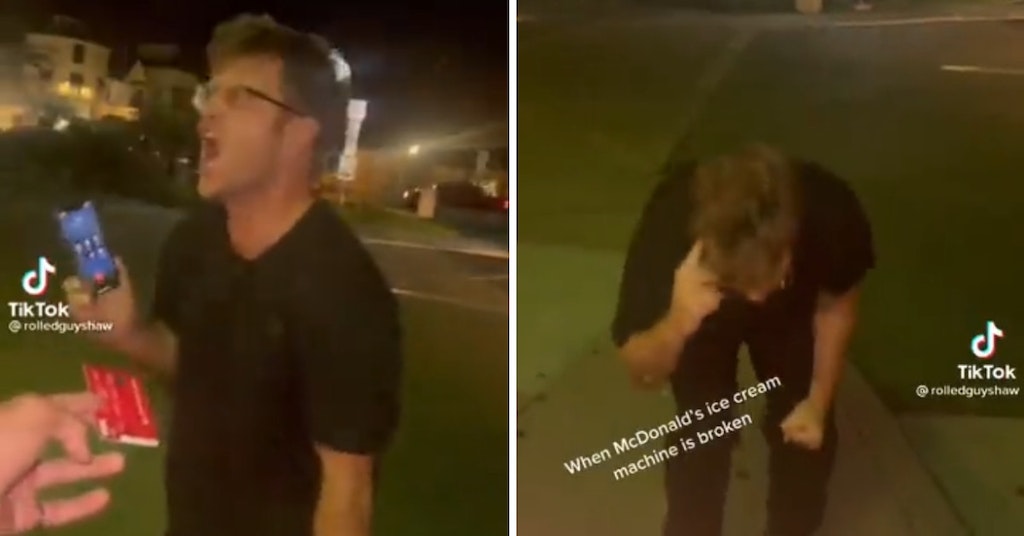 Drunk Dude Melts Down, Calls The Cops On Himself After Bar Boots Him For Groping A Waitress

A viral video showing a man screaming at the top of his lungs while calling the cops on a business because they kicked him out for assaulting a waitress is currently threatening to immortalize him as the biggest adult baby ever to go bar hopping in Orange County, and that’s saying a lot. The original video appears to have been deleted by the TikTok user who first posted it judging by the bio that simply says “Deleted the video.”

However, as is often the case with videos of public meltdowns, it was nabbed and re-posted on Twitter for the world to enjoy.

Fifty Shades of Whey managed to also get a screenshot of a comment from the TikTok user who first posted it explaining the video’s context, saying that this individual was “normal all night” until he got wasted and “grabbed a waitress.” In situations like these, it’s very likely that “grabbed” means that he committed sexual assault, which is something you might conceivably call the cops about because at least it’s a crime.

Bars throwing out heavily intoxicated patrons who assault their workers is not a crime, and in fact is considered baseline decent policy for any alcohol-serving establishment, but the screaming man called the police anyway.

It’s difficult to understand what this man is saying before he repeatedly starts screaming “f– you” as loud as humanly possible, but the next statement hints that he may think he’s more important and privileged than he really is.

“Who the f— do you think you are?!” he screeches twice.

“So, we’re having a good day,” says a woman off-screen.

The angry man tones it down a little for a while, panting from his own screaming as he tells the dispatcher repeatedly to get him a cop, as though a police officer is just another drink he’s ordering. He then asks for his credit card, which the person filming tried to give him earlier and now refuses to pick it up off the ground for him after he slapped it away. This results in more screaming.

By the end of the video, someone off screen confirms that yes, this man was indeed being accused of sexual assault, which he denies and then demands that the victim be brought before him because apparently h,e thinks he’s entitled to anything and everyone. The guy dubbed as the “Bayside Brett Kavanaugh” finally picks up his credit card as everyone around him makes fun of his tantrum.

According to the TikTok user, the police did come and tried to get the man to leave the area peacefully despite him being accused of assault by what seems like multiple witnesses. Instead of counting himself lucky that he lives in a world where the authorities don’t care about sexual assault or women unless it gives them a chance to arrest a man of color, “he started yelling at the cops then got arrested.”

This kind of scene is by no means unheard of, particularly in a nation with as many rich people as the U.S., public meltdowns have only become more frequent, with some public health experts blaming pandemic-related stress. For those of us more like the waitress who has to endure sexual assault from customers because she needs a job to avoid homelessness and starvation, witnessing this man’s suffering is a rare opportunity to feel a bit of vindication.