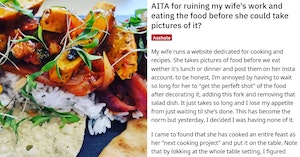 Man Ruins Meal Wife Spent Hours Cooking Before She Could Take Photos For Work, Asks If He’s The Jerk

A popular post in the infamous Reddit forum known as “Am I The A–hole” has delivered one (currently) married man an answer he probably was not hoping for, determining him to be the very jerk his wife called him out to be after demonstrating the patience and entitlement of a toddler. At least the title for this post was accurate rather than being reduced to something that sounds like no problem at all, asking “AITA for ruining my wife’s work and eating the food before she could take pictures of it?”

To be clear, this man’s wife isn’t just one of those people with a camera and an Instagram account who has to take photos of any and all food in front of her for posts. The first sentence explains that his spouse “runs a website dedicated for cooking and recipes,” meaning that the photos she takes of the food she prepares are directly linked to her livelihood, and, by extension, his.

Still, the very hungry grown man here simply got tired of having to wait a while for his hard-working wife to take the photos that help put the food on the table in the first place.

“[T]o be honest, I’m annoyed by having to wait so long for her to ‘get the perfeft [sic] shot’ of the food after decorating it, adding this fork and removing that salad dish,” the OP wrote. “It just takes so long and I lose my appetite from just waiting til she’s done. This has become the norm but yesterday, I decided I was having none of it.”

After finding that his wife had cooked what he described as a “feast” for them, apparently without any help whatsoever from the hungry man, but hadn’t taken the photos yet. This may be the crime that blew up this guy’s whole marriage, because he simply could not stand to wait or think to go have a snack if he’s really about to collapse from hunger.

“She went upstairs to get her camera that’s when I grabbed the spoon and started filling my plate from every dish she’s made and ‘ruining’ the look as a result,” he said. “I was hungry and unwilling to wait around for 10+ to eat.”

Considering the alternatives, we can assume that the “10+” is referring to minutes, which does not seem like long to wait considering we all have access to the entire internet all the time and he’s an adult. And yet, he’s now sleeping in the guest bedroom because he could manage the arduous tasks of waiting a few minutes before eating a free feast he didn’t have to help prepare or, hold onto your hats, speak with his wife about his feelings of resentment before acting out like a child.

“She came downstairs, saw the ‘damage’ and blew up almost crying saying I just ruined her cooking project that she worked hours for as well as putting efforts into.”

As shocking as it may sound, cooking a perfect meal with beautiful plating worthy of recipe website photos does require time and effort — at least if you want to be making any money from that website. As expected, OP’s actions resulted in a big fight and he left for a while to “cool off,” then came home to find out that he’s being kicked off the gravy train.

“When I returned she’d threatened that she’ll never have me eat anything she cooks and said she’d rather throw it in the garbage then give it to a ungrateful, obnoxious jerk like me,” he reported. “I said this wasn’t cool but she told me to go f— myself. I said fine then went to spend the night in the guests room. [S]he texted me the word ‘jerk’ about 15 times til I turned my phone off.”

All well-deserved, or at least that seems to be the nearly unanimous opinion of Reddit users who have overwhelmingly voted this man to be the a–hole.