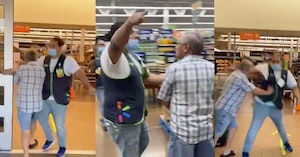 Maskless Customer Shoves His Way Past Employee To Shop At Walmart

Coronavirus rules are bringing out the absolute worst in people. By which I mean, of course, that refusing to follow rules to keep others safe during the coronavirus pandemic is revealing how absolutely awful some people always were.

A recent video that is so close to being hilarious if not for the stunning display of privilege and disregard for other humans shows an older white man in Florida absolutely determined to get into Walmart while shirking the mask requirements that went into effect in Orange County over the weekend.

At the start of the footage, the man charges the automatic doors as a Walmart greeter rushes to block him. One can only assume this was not his first attempt at getting in, since the camera was already rolling.

The employee blocks almost the whole door with his body and a wide stance, but the old man literally pushes past him and into the store. He continues pushing at him as the greeter keeps walking backwards to stand in front of him, and eventually somehow manages to fall on the floor himself during his efforts.

It’s wildly unclear what the man thought would happen after he forced his way into the store.

Did he think store employees would just throw up their hands and surrender the land of Walmartopia to this maskless fiend? Because that definitely isn’t what happened.

Instead, obviously, the employee continued following the man and telling him to leave the store.

A few other employees come by at one point, and a customer even offers the man an extra mask, which he ignores. The person recording can also be heard laughing and telling the man he has to wear a mask like everyone else, several times.

In a subsequent video, another man dressed in civilian clothing appears to help the employee force the irate man out of one of the aisles and back towards the entrance.

The sad thing is, nobody’s really surprised that this happened.

Incidents of people who believe they’re exempt from county mask requirements or policies made by privately owned businesses have been documented and reported all across the country over the last couple of months. But while so many of them involve Karens asking to speak to the manager, this one definitely took an unexpected physical turn.

And people who’ve said the man was in the right for laying hands on the employee to get into the store without a mask is getting properly ratioed.

But folks are also praising the employee for how he handled the situation, the best that he could.

There’s no word yet as to what happened with the employee who had to put up with this awful customer, or if he made subsequent attempts at getting his Walmart fix in, but there will undoubtedly be more folks just like this entitled dude, putting others at risk and literally fighting folks to make sure they can continue to do so.