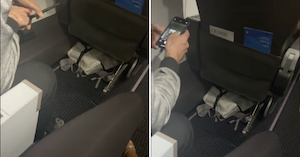 Woman Catches Man Taking Pictures Of Her Feet On Airplane

I haven’t been on an airplane in years, and I miss traveling. But then I read stories like this — and that feeling subsides. Cramped quarters, crappy food, and germs galore — and perverts taking pictures of your feet?

One TikToker who recently took a flight caught her seatmate taking pictures of her feet and editing them in front of her.

Alina (@alibedrossian) was on a Delta Air Lines flight when allegedly the man seated with her began to snapshots of her sandaled feet.

The video includes the trending sound, “the woman was too stunned to speak.” Alina captioned the video: “Cuz wtf am I supposed to say?” I mean, what do you say?

Footage shows the man tilting his iPhone camera to Alina’s feet and snapping a photo. Then, he reviews it and proceeds to edit it right in front of her. Creepy!

Alina said she had no idea who the man was.

Folks on TikTok were shocked at the man’s audacity.

“The fact that he even looked at the pic in front of you after lmaooo,” one viewer commented.