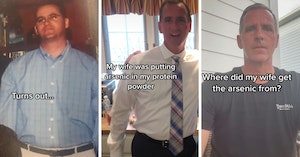 According to J.D. McCabe, a 56-year-old man in South Carolina, he was happily married to his ex-wife Erin for seventeen years. Suddenly, he says, at that point in their marriage Erin inexplicably became hostile towards him.

McCabe, who has written a book on the subject through the hybrid publishing service Ballast Books, also has a TikTok where he makes videos discussing the ordeal of his marriage, especially with those who have read his book.

His book is titled “The Third Gift: My Dance With the Devil (And Her Mother).” Godly, indeed. McCabe explains that “this is His [God’s] story,” and that God wanted him to write the book:

He recently told the media, ostensibly in service of promoting his book, that during the seventeenth year of their marriage, Erin began to accuse him of infidelity. She also said she thought he had substance abuse problems, and suggested repeatedly that he might also have a mental illness.

He says that he remained “understanding,” and chalked it up to her “autoimmune illness.” In one of the videos, he also expresses his belief that she had a “closeted mental illness” that he believes she hid from him (though he doesn’t say what particular illness he thinks she had, or how she was able to hide it for 17 years). He says that abusing prescription medications, including amphetamines and benzodiazepines, exacerbated her psychological issues.

“Her mood changed and her hostility was ever-increasing, but I chalked it up to her autoimmune disease,” he says.

McCabe explains that “as [his] marriage crumbled,” he decided to embark upon a new fitness routine that included lifting weights three times a week and using protein powder. Within six weeks, he had lost 30 pounds. His co-workers and friends wondered why he had lost so much weight so quickly. McCabe claims now that they all “thought I was dying of cancer but didn’t know me well enough to ask.”

He began to experience other health problems that included gastrointestinal distress, joint pain, difficulty swallowing, and a total weight loss of nearly seventy pounds over the course of the next few months. After he moved out of his marital home, he says, he later came to feel certainty that his then-wife had been putting arsenic in his protein powder.

But, he says, at that point, “the physical evidence was gone.” He says that his sister-in-law told him, “I think [your wife]’s poisoning you,” while his blood work was coming back abnormal and his liver enzymes were high; and that a doctor then later confirmed his chronic arsenic exposure through hair and nail tests.

All the while, he says, his wife was the one abusing drugs and being unfaithful. In his book, McCabe describes a situation in which his ex-wife has told her attorney that McCabe gave her herpes (although his wife does indeed test positive for the virus, McCabe says that his own test was negative).

“The first two gifts [she gave me] were our kids,” he says. “I call [her positive herpes test] the third gift, because it emotionally set me free. Because for four years I was emotionally and verbally abused by her. Every accusation she levied against me, she was doing herself.”

McCabe tells viewers and readers that he is “doing great now,” and is pleased to report that the couple’s two adult children no longer speak to their mother.

McCabe says he intends to use the proceeds from his book to begin a non-profit organization to benefit abused women, and another non-profit to help the son of a veteran who took his own life.

At this time, it does not appear that Erin has made any public comment, nor has she written a book on the subject.