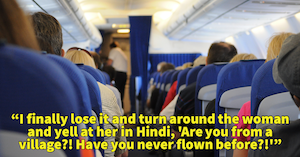 Flying with children is really, really hard. It’s also hard for passengers when kids are out of control. While ideally a parent should be prepared to keep the kids busy, we all know this doesn’t always happen. Some parents try their hardest while others give up.

One Indian American Redditor tried a few times to calmly ask the Indian family behind him to stop their kid from kicking his seat, but he lost his temper after the last time and finally reverted to yelling at the family in Hindi, basically asking if they were born in a barn.

“I (39m) was on a flight from coming back to New York from London. I take my seat which is next to the aisle in the middle section of the plane. A woman and her two very young sons (potentially twins, but close in age) sit in the row behind me. One of the boys is sitting directly behind me. Her husband is sitting in the row behind them. They are Indian (this is important later), and I am Indian-American,” the OP writes.

“The plane takes off and the boys start yelling about how this is best day ever, and generally making a lot of noise. I put in my headphones, tune them out, and start watching inflight entertainment. Shortly after the doing that I noticed that something is digging into my back. I try to move around a little bit, and whatever it is is moving. I turn around and I see that the boy behind me is sitting in a way where he has his feet jammed into the back of my seat. I ask the mother to ask her son to not sit that way, as it is uncomfortable for me. She does, and I turn back around.”

“Maybe an hour later, there’s a something continuously bumping into the back of my seat. I turn around and the kid is hitting the back of my seat with his hands. I again ask the mother to tell her son not to do that. She rolls her eyes at me, but tells her kid to stop.”

Once again, something is going on behind me. Since I feel the back of the seat constantly moving back and forth. I look back and the kid is open and closing his tray table again and again for no reason at all. I finally lose it and turn around the woman and yell at her in Hindi, ‘Are you from a village?! Have you never flown before?! Please discipline your children and tell them to stop messing with my seat! People like you give Indian travelers a bad name, and that is why people don’t like traveling with us!’ Her husband notices me and says in English ‘What is going on?!’ I tell him that this is the third time I have had to ask his wife to get his children to stop bothering me. He speaks harshly to his kids, his wife looks at me angrily, and I turn around. The kids don’t bother me for the rest of flight.”

“I got home and was talking to my mother on the phone and told her what happened. She told me that wasn’t very nice, and I shouldn’t have done that.”

Was he too harsh?

“OP tried kind & polite, 3 times. Yes airplanes now mostly suck – but people who refuse to parent their children in flight are a MAJOR PART OF THE PROBLEM. You know your kid. You know how to manage them – be prepared for the worst and for the love of whatever diety – keep their fecking feet off my seat. I’ve watched parents watch their kids doing it & doing nothing until the person points it out. And others behave indignantly when cabin crew are asked to intervene. I don’t have my own kids but have flown – me the only adult – w 3. Books, games, rent or buy a cheap tablet & discuss the rules of behavior for weeks in advance, snacks and a couple treats they don’t know about in case of ’emergency,'” said

“Are you from a village is no worse than were you born in a barn. It’s a colloquial expression. NTA,” said

“NTA for asking them to stop. But I’m not sure I would have made such personal comments, even if you are also Indian and you have ‘cultural context.’ I was going down an escalator in Europe (I think it was a French speaking country) and an American family was blocking the ‘exit’ with their suitcases and standing there because they were confused and discussing where they need to go (I knew they were American by their accent and the fact that I could hear their conversation and they were confused about where to go). I am American and I try very hard to not be ‘an ugly American’ (I speak French and I try to learn the basic pleasantries of other languages of places I’m going). So I’m getting close to the end and I said ‘Excuse me.’ They do nothing. I then get louder ‘PLEASE Excuse me.’ Finally, I’m on the last 2 stairs and they aren’t moving. I was getting desperate before I had no where to go and I said ‘WOULD YOU PLEASE EXCUSE ME’ (yes, that loudly). Finally, they look at me, totally befuddled, like “Where did you come from and why are you here” as they scrambled to move their bags aside. As an American, I would have felt justified to say, ‘This is why we’re called Ugly Americans.’ I admit that I did say, ‘If you’re not sure where you’re going, step aside so that other people can pass,” shared

“NTA. I recommend talking directly to the kid next time. That’s what I do! I turn around and ask them to please keep their hands/feet to themselves. They’re usually shocked that a stranger noticed what they were doing and they’ll cut it out. Just be polite about it. They’re kids, they don’t know any better. But they can absolutely learn,” noted