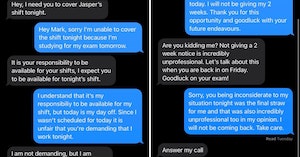 Manager Demands Worker Come In On Day Off, Backpedals Hard When They Quit With No Notice

Another manager has lost a worker by threatening their job if they don’t come in on their day off, even with a perfectly good reason to refuse, leaving them with even less coverage when the employee quit with no notice. A viral post on Reddit’s “Antiwork” forum shows a text conversation between the individual with poor management skills and the fed-up worker who let them know exactly who was being unprofessional.

After the manager says he needs the Reddit user to cover another employee’s shift, the worker informs manager “Mark” that they have to study for an exam tomorrow — something probably more important than any shift at a job you take while in school. However, Mark seemed to think the employee’s whole life should be about the job.

However, it wasn’t the OP’s shift. It was clearly Jasper’s.

“I understand that it’s my responsibility to be available for my shift, but today is my day off,” the worker points out. “Since I wasn’t scheduled for today it is unfair that you’re demanding that I work tonight.”

Mark claimed that he wasn’t demanding anything, even though he clearly was, but was “extremely disappointed” and took the classic move of saying they’ll “discuss” the issue later — an obvious threat to the worker’s job. The OP, however, was not interested in putting up with this kind of treatment.

“I am very confused on what you’re disappointed about,” they said. “I was not scheduled for today’s shift and as a manager it is your responsibility to find someone that IS available for tonight, and NOT FORCE someone that isn’t available to cover a shift.”

The worker then informed Mark that they were quitting, effective immediately. He did not like that at all, and pulled another common manager move of trying to deny that their employee was quitting.

“Are you kidding me?” he responded. “Not giving a 2 week notice is incredibly unprofessional. Let’s talk about this when you get back on Friday.”

“Sorry, but you being inconsiderate to my situation tonight was the final straw for me and that was also incredibly unprofessional too in my opinion,” the worker replied. “I will not be coming back. Take care.”

The last message shown in the screenshots is Mark demanding that the worker pick up their phone, and we hope they never did.