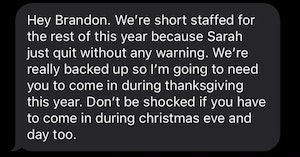 Manager Demands Worker Ditch Scheduled Time Off Because Someone Quit, Loses Another Employee

Yet another example of a worker quitting their job after a manager thought they could walk all over them is spreading online as part of what appears to be a mass movement of people who are sick to death of being treated like garbage for not enough money to live on. This time, worker “Brandon” had to put manager “John” in his place after a third employee, “Sarah,” quit on him without warning. Reading the text conversation between John and one of the workers he had remaining, you can quickly see Sarah’s point.

“We’re short staffed for the rest of this year because Sarah just quit without any warning,” John writes. “We’re really backed up so I’m going to need you to come in during thanksgiving this year. Don’t be shocked if you have to come in during christmas eve and day too [sic].”

Demanding that employees come in on their days off, speaking as though their doing so is some kind of inevitability instead of asking respectfully if they can, appears to be a common theme in screengrabbed conversations like these that are popping up all over the Internet. Rather than make the effort to hire someone or just take the loss because they couldn’t retain their staff and were apparently already behind, the manager tries to put all this burden on the workers, blaming Sarah and then trying to force Brandon to pick up his slack.

What managers had better start catching on to is that these days, quitting your terrible job is the coolest. In Brandon’s case in particular, he had already requested the time off weeks ago and was in no mood.

One thing that manager John is correct on in this conversation is that he never did ask Brandon to come in, as you might do from one respectful adult to another. Rather, he ordered Brandon to do so, but instead of taking the worker’s charitable interpretation, he doubled down and lost him. But then again, who really wants an employee with whom you have to, checking notes, “set expectations”?

“We’ve had to set expectations with you multiple times this year,” says John, “coming in is the least you can do. your pto request has been denied. i’m not asking you to come in, i’m telling you that you have to.”

Things John got wrong in this final message include the idea that coming in to work is the least Brandon could do and that he has to do it, as though any worker can be physically forced to show up for work by some terrible boss on a cell phone.

“And I’m telling you that you’ll have no worker at all now,” says Brandon. “I quit.”

Sharing final conversations with managers has become a hot trend on social media recently, topping off reports of unprecedented numbers of workers quitting their jobs even after the pandemic-era unemployment benefits ended before the pandemic did. Right-wing and centrist politicians, pundits, and other hand-wringers seemed certain that that cutting off lifelines for many thousands of Americans would force them back to work or stem the tide of the new labor movement, but they were extremely wrong.

Now U.S. workers are quitting and striking like never before, and everyone else who doesn’t benefit from late-stage capitalism is loving it.