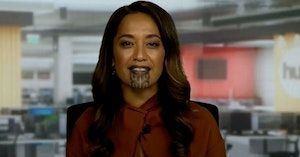 A New Zealand news anchor with a traditional face tattoo representative of her Māori heritage put a man who continually lodged complaints with her station in his place.

Oriini Kaipara has been breaking barriers since becoming the first person with moko kauae — Māori markings on her chin — to host a mainstream TV news program in New Zealand back in 2019. Last year, she became the first host in national primetime news with the traditional facial tattoo thanks to her job at Newshub.

But not everyone takes kindly to diversity and Kaipara has dealt with her fair share of backlash for daring to embrace her culture in such a public way.

This week, she took to Instagram Stories to share a message from one viewer, David, who she says constantly writes into the news station as a whole to complain about her on-air presence.

“We continue to object strongly to you using a Maori news presenter with a moku [sic] which is offensive and aggressive looking,” he wrote. “A bad look. She also bursts into the Maori language which we do not understand. Stop it now.”

Calling David “one of ‘those’ gifts that keep on giving,” Kaipara admitted that the most recent message had made her reach the point of giving in and responding to the obnoxious viewer, and she shared her response online.

“Thank you for all your complaints against me and my ‘moku.’ I do find them very difficult to take seriously given there is no breach of broadcast standards,” she told him. “I gather your complaints stem from a place of preference on how one must look on-screen, according to you.

“Moko and people with them are not threatening nor do they deserve such discrimination, harassment, and prejudice. Moko are ancient cultural markings unique to the indigenous people of Aotearoa, myself included. We mean no harm or ill intent nor do we/I deserve to be treated with such disregard.”

Kaipara told the NZ Herald that racist complaints against her are in the minority of messages she and the station receive, and an outpouring of support for her online seems to anecdotally back that claim up.

“The fact that my existence triggers some people is testament to why we need more Māori advocates in key roles across every sector,” Kaipara added. “Ehara taku toa i te toa takitahi, engari he toa takitini. Success is not the work of an individual but the work of many.”