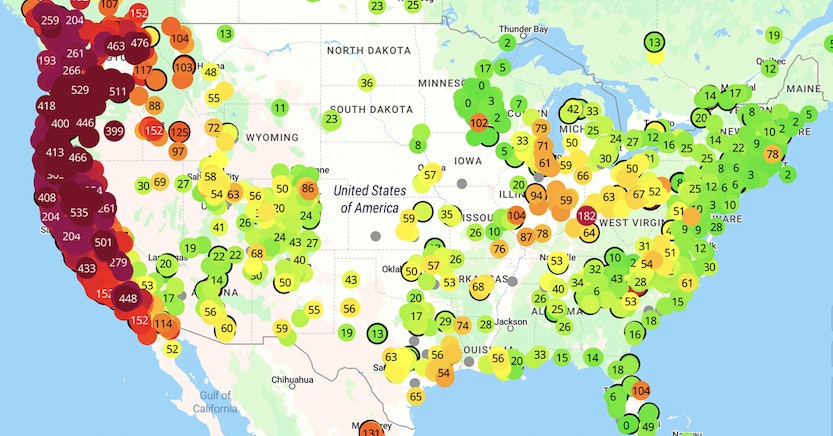 Wildfires in Oregon, Washington, and California have been raging for over a week, destroying millions of acres of land and causing mass evacuations. At least 26 people have died and many more are missing.

California is experiencing four of its worst fires ever recorded, according to Insider. Each year, the state seems to top itself as climate destruction causes more devastation—though one fire this year was sparked by a gender reveal party, so that was just cultural devastation.

Air-quality monitoring company PurpleAir has an interactive map that allows users to check on air quality around the world, zooming in and out in particular areas. A screenshot of the U.S. shows that the air is unhealthy to breathe up pretty much the entire West Coast:

In fact, it’s the worst air quality on Earth:

The colors represent the air quality index (AQI), with green being the best and that dark mauve being the worst. Green represents an AQI between 0-50, mauve starts at 200 and goes up to 500. The EPA considers any AQI above 150 to be “unhealthy” and above 300 is a “health warning of emergency conditions.” They stop making recommendations at 500, because there’s no way to recommend people attempt to survive those numbers.

Sensors register the AQI levels and right now, most of the West Coast is in the mid-400s. Salem, Oregon, was up to 758 AQI on Friday morning.

These levels are dangerous for many reasons, but they can exacerbate health conditions and increase “risk of heart attack, stroke, and premature death.” If you’re generally healthy, it can still effect your breathing, causing wheezing coughing, and irritation. Erin Landguth, an associate professor at the University of Montana’s School of Public and Community Health Sciences, told The New York Times that bad fire seasons can lead to “three to five times worse flu seasons.”

This would be bad news during an ordinary flu year, but in a pandemic featuring a virus that attacks the respiratory system, it’s a nightmare.

If you’re in the smoke screen, limit time outdoors and wear an N95 mask if you have one. Keep windows closed and turn on your air purifier if you’ve got one of those. Once again, the best way to stay safe is to stay home.