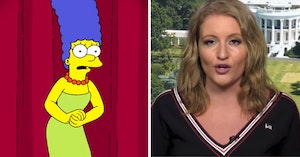 Marge Simpson herself has issued an official response via The Simpsons’ Twitter account to senior Trump adviser and lawyer Jenna Ellis saying that Kamala Harris sounds like her and meaning it as an insult. The character, known for her gravelly voice (from growing up around avid smokers) and mild manner, took to the stage to point out that Ellis’ comment was a little disrespectful and not a good example to the children.

“I usually don’t get into politics, but the president’s senior advisor, Jenna Ellis, just said Kamala Harris sounds like me,” says Marge, voiced by Julie Kavner. “Lisa says she doesn’t mean it as a compliment.”

Marge also managed to reference a recent Trump tweet claiming that he is beloved by “suburban housewives.”

“If that’s so, as an ordinary suburban housewife, I’m starting to feel a little disrespected,” she continues. “I teach my children not to name-call, Jenna.”

Then, as the camera pans out from the Simpson home, you get to hear how Marge really feels.

“I was going to say I’m pissed off, but I’m afraid they’d bleep it.” The video quickly went viral, gaining over 900,000 views in mere hours.

Ellis tweeted the remark about Marge and potential future Vice President Kamala Harris on Wednesday, saying simply that “Kamala sounds like Marge Simpson.” This was largely taken as an insult as Marge’s voice is meant to be somewhat annoying or grating, and the comment was panned by the left as being a cheap shot on both women.

The Trump adviser tweeted her own response to the video, once again saying something that is probably meant to be taken as an insult but shouldn’t be.

Marge’s response to her, on the other hand, is being praised for being as classy as it is hilarious.