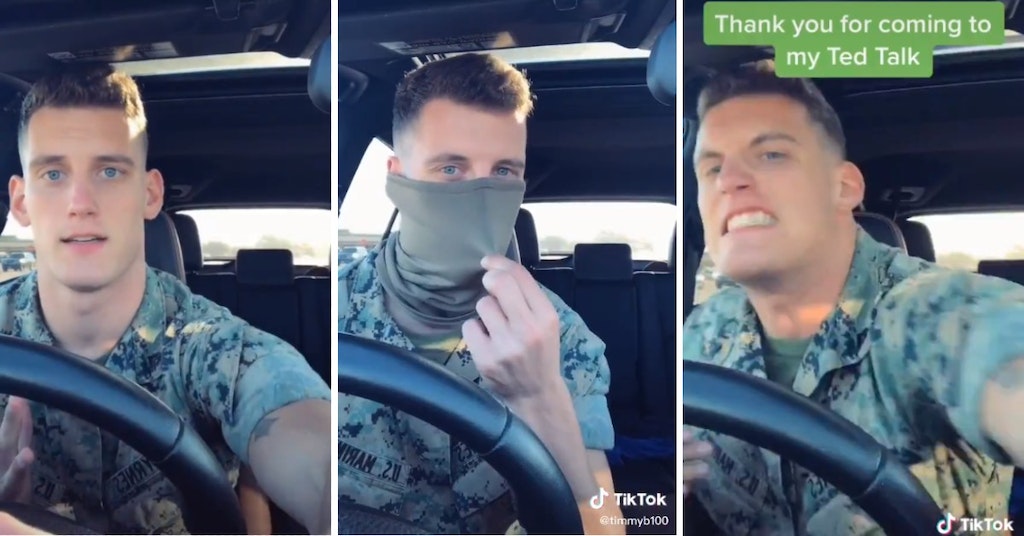 A U.S. Marine who recently returned from his deployment to Japan was a little upset to find that the country was on lockdown due to a pandemic that is still being made worse in part due to a significant segment of the population that refuses to wear masks. In order to get out some of his frustrations and possibly even convince some people to do the right thing, he made a TikTok video that is being widely praised as hilarious.

The video begins with Timmy Byrnes mocking people who complain “it’s hard to breathe” in a whiny voice before showing how he’s had to wear a scarf or even a full gas mask while on the job.

“Have you ever had to wear this f***ing noose? Notice how you can’t really understand me? I have to do this,” he says while pulling the middle of the scarf away from his mouth, “to be able to f***ing talk in this thing.”

He also had something to say to the people who say they shouldn’t have to wear a mask because “freedom” and “America.”

“It’s called a dress code, Kevin!” Byrnes yells into the camera. “The 7/11 also requires you to wear a shirt!”

“I’ve been overseas for two and a half years … and I finally get back to America just in time for it to shut down, and you idiots are making it shut down longer! It’s a piece of cloth!”

Byrnes ends the video by reaching out and smacking his own phone over in pure frustration.

The Marine’s TikTok videos typically get tens of thousands of views, but this one has really taken off with over 1.6 million views, plus an additional 3.3 million views on Twitter. As the U.S. Mask Culture War soldiers on, many people are deeply feeling Byrne’s frustration with the anti-mask crowd, including other members of the military.

I Wore a mask for 25years…. So what’s YOUR Problem 🤷🏾‍♂️🇺🇸 pic.twitter.com/LIUdoRwCxO

Jarhead Of The Year (if that's a thing) https://t.co/YPn4plZ3DF

This Marine is channeling what this soldier thinks about the anti-masker brigade. https://t.co/dcNSrwZ1Fl

I cannot stop laughing. This is the best video I’ve seen 😂😂😂 https://t.co/vO0xNYdm4E

Timmy Byrnes is my hero. Thank you, sir for so eloquently speaking my mind. #WearAFuckingMask https://t.co/VVIWNQkPEL

Additionally, the public’s thirst for this guy could swallow up an ocean.