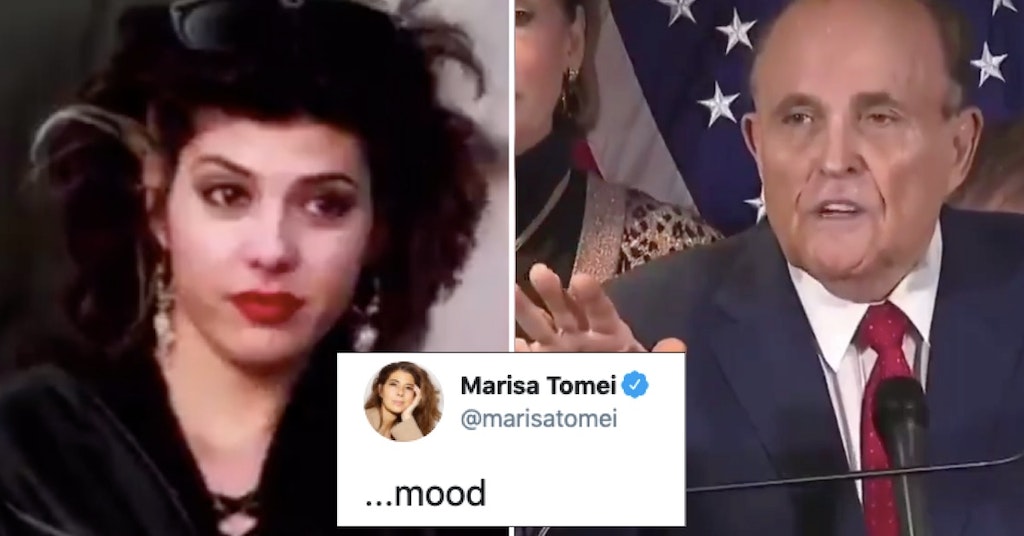 
It’s hard to explain stories involving former NYC mayor Rudy Giuliani, because even he seems to barely know what’s going on most of the time. After his appearance at Four Seasons Total Landscaping, he attempted another press conference in Washington D.C. on Thursday. In between literally melting and wiping snot all over his face, he managed to make some new enemies in Hollywood.

Once again, Giuliani was peddling conspiracy theories about Republican poll watchers being blocked from their job. Which they weren't. But he had a little joke about it.

"Did you all watch My Cousin Vinny?" he inexplicably asked the crowd. "It’s one of my favorite law movies because he comes from Brooklyn."

He then described the scene where the lawyer, Vinny, asks a witness on the stand how many fingers he is holding up. She can't answer correctly, because she's too far away.

"These people [Republican poll watchers] were further away than My Cousin Vinny was from the witness," he explained, kind of. "They couldn’t see a thing!"

The film's director, Jonathan Lynn, isn't super happy to have his hit movie mentioned in the same breath as Donald Trump's coup. He essentially told The Hollywood Reporter that he doesn't want to hear his movie's name in Giuliani's mouth.

"I regard Giuliani's praise of My Cousin Vinny as generous from the man who is currently giving the Comedy Performance of the Year," said Lynn.

Meanwhile, Marisa Tomei had a gif of her own face to respond with:

You don't want to mess with Brooklyn, Mr. Mayor.