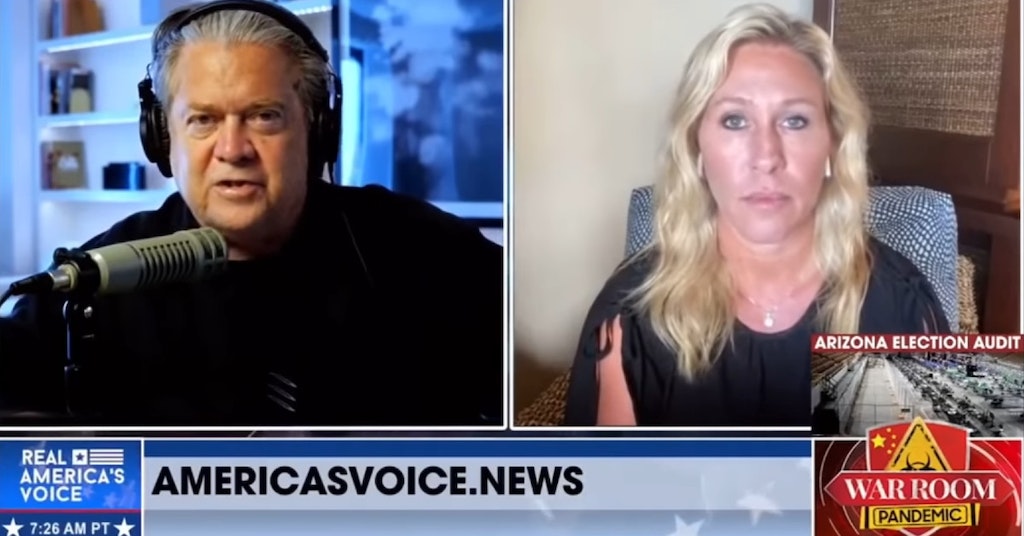 Rep. Marjorie Taylor Greene has publicly admitted that she doesn’t “believe” in evolution while talking about COVID-19 on Steve Bannon’s “War Room” show on Real America’s Voice, asserting that she instead believes in God. Greene referred to the widely accepted theory of evolution as “so-called science” while arguing for the so-called idea that China released the novel coronavirus as a “bioweapon” inside of their own country.

She said this in response to Bannon clarifying her “bioweapon” claims, confirming that she does “buy” the idea that scientists have been doing research on various different coronaviruses for many years in order to prepare for pandemics and work on vaccines. Greene argued that there could be no other reason to do this type of research on a dangerous virus, as they do in the U.S. and many other nations around the world, except to create a weapon.

“You don’t buy the argument that says, the gain of function is because we’ve gotta take these viruses and we gotta power them up to look for vaccines and to look for other solutions in case somehow they come up with this, you don’t buy the logic of that, is that what you’re saying?” Bannon rambled.

How exactly Greene thinks evolution fits into this conversation may never be clear, but the fact that viruses often mutate and change over time, sometimes becoming more powerful and dangerous, is fairly undisputed in the medical science community regardless of whether God is or is not involved.

Greene went on to claim that “these viruses were not making people sick until they created them,” presumably referring to the one lab in Wuhan, China. This is completely untrue, as the coronavirus family of pathogens includes those that cause SARS and other illnesses that have been killing people for decades.

She further made the case that “American tax dollars” should never be spent on research into viruses, presumably including the kind that has saved countless lives from the scourge of polio, measles, smallpox, AIDS, and many other illnesses that Greene never even had to worry about.

It’s not exactly surprising that Greene doesn’t “believe in” evolution, as many conservative Christians believe in a literal interpretation of Bible stories that say God created everything in six days, but even most Republicans try to avoid saying it out loud these days. Still, this statement is no more absurd than her belief in Jewish space lasers starting the wildfires on the West Coast or that mask mandates are comparable to the actual Holocaust.

That doesn’t mean people aren’t going to make fun of her for it, however.