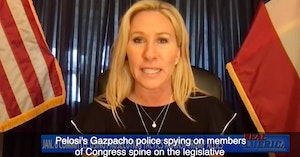 Marjorie Taylor Greene Dragged After Mixing Up ‘Gestapo’ And ‘Gazpacho’

Marjorie Taylor Greene may have been kicked off Twitter, but she’s still regularly a topic of conversation.

Most recently, she drew attention for a hilariously dumb error while trying to complain about Democrats yet again.

“Not only do we have the D.C. jail, which is the D.C. gulag, but now we have Nancy Pelosi’s gazpacho police spying on members of Congress, spying on the legislative work that we do, spying on our staff, and spying on American citizens,” she said.

Greene presumably meant to invoke fears of Nazi Germany (a tough sell, considering many of her supporters probably don’t believe in the Holocaust) by claiming Nancy Pelosi has Gestapo, or secret police.

Instead, she wound up putting the fear of Nancy Pelosi’s cold soup in our hearts.

A slip of the tongue is something that happens to everyone, and being a public figure just means it’s amplified, as you are constantly under a microscope.

However, considering one of the extreme frustrations with modern Republicans is how little they seem to value comprehensive education for children and teens, and the recent storm about Tennessee schools banning the teaching of a Holocaust-based graphic novel, the fact that MTG seemingly didn’t know the difference between Nazis and soup feels like a little more than just a quick laugh.

Still, the jokes were too good to pass up, and the internet didn’t disappoint.

But the word mix-up did draw attention away from something more insidious — that Greene is accusing Pelosi of having some secret police that spies on everyone.

In reality, what Greene was reportedly upset about was a Capitol police officer allegedly entered Republican representative Troy E. Nehls’ office illegally while he was absent to spy on him. Capitol Police Chief Tom Manger rebuked the claim, saying an officer was following protocol in checking the office after Nehls left without closing the door, so as to make sure everything was secure.

And Pelosi, of course, does not actually control the Capitol Police — or any other secret police, soup-related or otherwise.