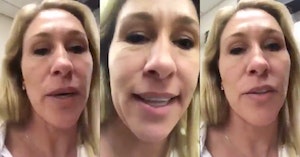 The deep dive into just how wildly inappropriate it is that Marjorie Taylor Greene is a member of the United States Congress continues.

Latest in a slew of offensive and ridiculous videos that have resurfaced as Greene faces deeper scrutiny following the January 6th Capitol riots is one in which she marches through the halls of Congress, talking about how she is searching for representatives Ilhan Omar and Rashida Tlaib, with the intent to coerce them into being sworn into office again—but this time on the Bible.

Both Democrats were sworn into office using the Quran in January 2019 — something that is completely legal, according to the Constitution Republicans like Greene claim to love so much.

“We’re gonna talk about how to swear in on the Bible with them, and let them know what our law says, that you can’t swear in on the Quran,” Greene inaccurately claimed in the video.

She also completely baselessly claimed that allowing someone to swear in on the Quran was a law that was put into place after Omar and Tlaib joined Congress, “because it wouldn’t have been passed in a Republican-controlled… [Congress].”

Because of this 100% made up sentiment, Greene said, “they’re not really official, I don’t think.”

As pointed out by The Daily Dot, multiple presidents were sworn into office without using the Bible. It is not a requirement by the United States Constitution and never has been.

Moreover, Omar and Tlaib weren’t even the only members of the 116th class of Congress who were sworn in using something other than the Bible.

This is just yet another in a long line of videos and social media posts made by Greene over the last several years that has resurfaced in recent days.

She has also supported the execution of Democratic members of Congress, harassed Parkland shooting survivor David Hogg, and expressed belief in a number of conspiracy theories including yet another bigoted one that claims California wildfires were caused by a Jewish laser from outer space.

Calls for her removal haven’t been limited to the general public. Other members of Congress have also suggested Greene isn’t fit to serve as a U.S. representative, but Republicans don’t seem particularly keen on acting on all of the horrible things that have resurfaced.

To many, she seems to represent the continuation of Trump in a post-Trump era, and if she can draw the same crazies he did to the party, winning them votes and power, well, why would they ever let ethics get in the way of that?